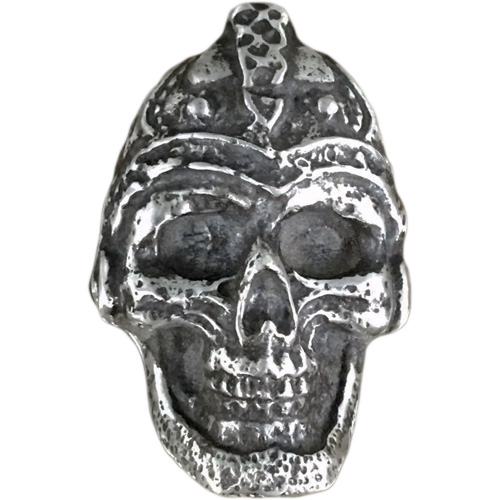 The Third Servile War during the Roman Empire’s reign occurred in 73 BC when Spartacus led a group of escaped slaves, many trained as fierce gladiators, in an uprising against the Roman Army. Known as the Gladiator War, one of the commanders of the slave army was a Gaul named Crixus. Right now, the 6 oz MK Barz Silver Hand Poured Skull Warrior Mask is available to purchase online at Silver.com.

In the Gaulish language, the name Crixus means “one with curly hair.” Born in Gaul, Crixus was taken into slavery in Capua by the Romans and forced into gladiatorial training for the amusement of the Roman citizenry. Together with Spartacus, he led a slave revolt in 73 BC that grew into the Third Servile War against the Roman Republic.

The mask of Crixus is reflected in the design of the 6 oz MK Barz Silver Hand Poured Skull Warrior Mask. Crixus and Spartacus escaped with 70 other gladiator slaves from Capua, easily defeating the local Roman militias and legions sent to recapture them. However, despite a following of some 120,000 people during the war, Crixus and 30,000 followers separated from Spartacus at the end of 73 BC.

His death during a battle with Roman consul Lucis Gellius Publicola near Mount Garganus in 72 BC saddened Spartacus, who forced his captured Roman soldiers to fight mock gladiatorial games to the death in the honor of Crixus, with some 300 Romans dying as a result.

The obverse face of these 6 oz MK Barz Silver Hand Poured Skull Warrior Masks reflect the imagery of the mask worn by Crixus as both a gladiator and a general on the field of battle. It includes the skull of a dead man inside of it, jawbone, nose, and eye sockets visible in the design.

On the reverse are engravings which have been hand-stamped onto the bar by MK Barz. You’ll find the individual serial number, out of 500 in the issue, along with the weight, purity, and metal content of the bar.

If you have any questions, please contact us. Silver.com customer service is available to you on the phone at 888-989-7223, online using our live chat, and via our email address.