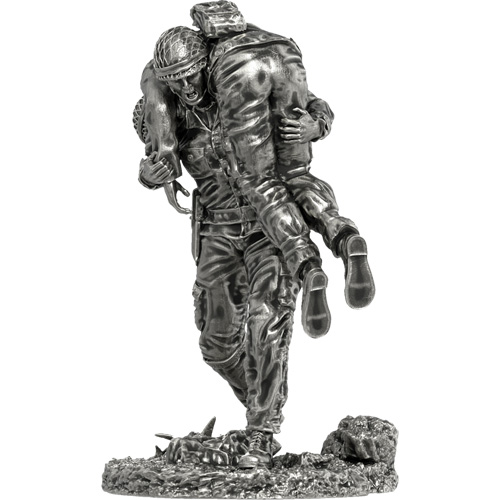 American history is full of stories of valiant acts of heroism involving the rescue of wounded, fallen, and captured American soldiers. Honoring the Latin phrase “nemo resideo,” for generations, American servicemen and women have put as much effort into rescuing fallen comrades as they have into defeating the enemy. Now, 6 oz Antique Finish Silver Soldiers Collection Wounded Soldier Statues capture the heroism of an individual risking their own life for a team member and are available to you for purchase online at Silver.com.

The origins of the phrase “leave no one behind” may reach back to Classical Antiquity, but in America, its origins as a creed for military forces are less clear. One accepted point of origin comes from just before the United States broke away from British rule to form an independent nation. A group of American militia fighters serving alongside the British Army in the French and Indian War is credited as one of the first American fighting units to use the creed.

Known as Rogers’ Rangers, this American militia unit was particularly effective against the French by combining pioneer rifles and indigenous fighting tactics to defeat the better trained French in a number of encounters. In fact, today’s elite US Army Ranger battalions were created in 1974 in the waning days of the Vietnam War by Army Chief of Staff General Creighton Abrams. Among their missions, these elite infantry soldiers were tasked with rescuing American hostages and finding those trapped behind enemy lines. The unit was even named Rangers after Rogers’ Rangers. Within the Ranger Creed, you will find the phrase “I will never leave a fallen comrade to fall into the hands of the enemy.”

For the design of the 6 oz Antique Finish Silver Soldiers Collection Wounded Soldier Statues, the mint has created a stellar design capturing the heroism of one individual putting his life on the line to the benefit of a fallen comrade. Refusing to leave his wounded team member behind, this soldier has run into the crucible of fire to retrieve his fellow soldier and carry him out on his shoulders.

These 6 oz Antique Finish Silver Soldiers Collection Wounded Soldier Statues are available to you in brand-new condition. Each one has an antique polish befitting a proper heirloom piece. The silver statues come with a Certificate of Authenticity and have the serial number, weight, and purity of each specimen laser-etched on the base.

Silver.com customer service is available at 888-989-7223. You can also connect with us online through our live chat and email address.