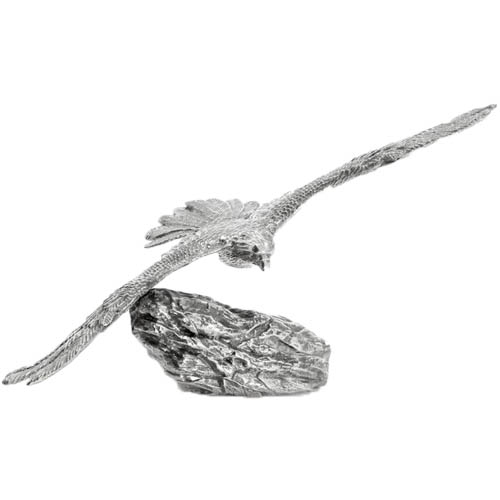 The eagle is one of the most powerful symbols of freedom and longevity in the world. Its soaring prowess and its majestic appearance have been a beacon to millions around the world. Few things in this world are more powerful than the appearance of one of these birds in flight overhead. Today, the 8 oz Silver Antique Finish Soaring Eagle Statue delivers that image in beautiful form and is available to you online at Silver.com.

North America is home to a variety of eagle species, most notably the bald eagle and the golden eagle. These two powerful species have become symbols of two different nations on the North American continent. In 1782, the fledgling United States of America adopted the bald eagle as its national emblem. Following its own independence in the 19th century, Mexico adopted the golden eagle as part of its own coat of arms.

The bald eagle is known as such because of the white feathers on its head, which when viewed at a distance, gives the bird the appearance of lacking feathers on its head at all. America’s founding fathers chose the bald eagle for its longevity, majesty, and power. Those men believed that the nation they had fought to form would share all of those characteristics in its people.

8 oz Silver Antique Finish Soaring Eagle Statues are available with the image of a powerful eagle soaring across the edge of a rocky cliff. The eagle glides with its wings spread to the full extent as it appears to be suspended in air in this design. Look closer and you’ll realize that the bird’s wingtip is connected to the rock to aid in suspending it in the air.

All of these 8 oz Silver Antique Finish Soaring Eagle Statues are available to purchase with a protective shipping box in brand-new condition. The statues all feature an individually numbered Certificate of Authenticity. If you look at the base of each silver statue, you’ll notice the purity of the statues and a unique production number laser-etched onto the base. The antique polish is proprietary to Hotco and delivers an heirloom-quality finish for the statues.

Please feel free to reach out to Silver.com with your questions when buying silver. You can reach us at 888-989-7223, chat with us live online, or simply send us an email with your inquiries.