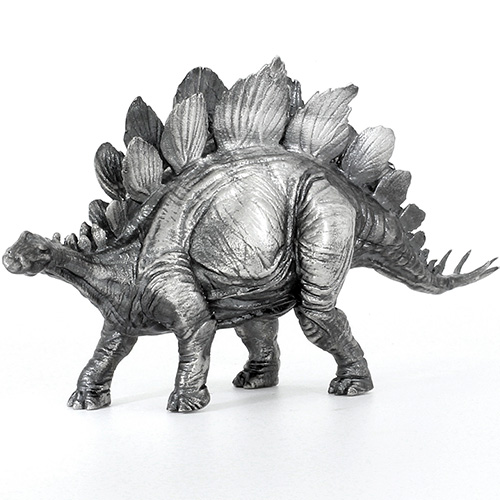 The Lost World Collection of silver statues from Heads or Tales Coins takes you back in time over the course of 65 million years, bringing to life in 3D form in .999 fine silver content the most famous creatures from the prehistoric era. Though mankind never encountered most of these beasts, you can have your own heirloom-quality statue regardless. Today, 8 oz Antique Finish Silver Stegosaurus Statues are available to you online at Silver.com.

Cosmin Morar is the designer behind many of the popular silver statues offered today from Heads or Tales Coins, better known as HotCo. He hand crafts all of the statues in this collection to exacting specifications, ensuring you receive a beautiful silver piece that has the utmost quality.

Stegosaurus is one of the most popular dinosaurs depicted in 20th century and modern books, films, and television series. However, these creatures were not well known for a very long time because incomplete skeletons were exceptionally rare. The first bones ever discovered of the stegosaurus were merely fragments scattered amongst the bones of other dinosaurs.

It wasn’t until the mid-20th century that museums began to showcase this particular species. Most of those on display even then were assembled as composite displays with bone fragments inspired by several different species because a complete stegosaurus skeleton had not been found. Thanks to the 8 oz Antique Finish Silver Stegosaurus Statue from HotCo, you won’t have to wait that long to find your own complete stegosaurus.

Each of the 8 oz Antique Finish Silver Stegosaurus Statues listed here today feature all the common bodily characteristics of the massive beast. The tight, leather-like skin of the beasts is visible from head to toe on the body, and its trademark vertical spine plates and spiked tail are captured in perfect detail.

All statues in this release stand just under 5cm in total height, feature a laser-etched serial number on the bottom, and come complete the HotCo’s proprietary antique polish which adds depth to the design and age to its appearance.

HotCo is a private company that specializes in the production of collectible silver products. The Lost World Collection features four statues in total, with the Stegosaurus preceded by the T-Rex and Triceratops, and the Woolly Mammoth still to come!

Please direct your questions to Silver.com. Our customer service team is available at 888-989-7223, online using our live chat, and through our email address. Don’t forget to check the latest silver price per ounce on our homepage while you shop!