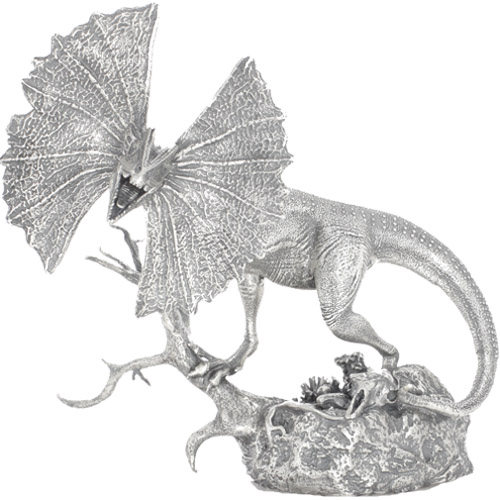 Depictions of the Dilophosaurus in popular media and the fossil record suggest diverging stories on the size and ferociousness of these dinosaurs. One of the first bipedal carnivores to hunt in the ancient world, the Dilophosaurus is shown as a small, dog-sized predator in the Jurassic Park franchise, while the fossil record suggests that the creatures were actually much larger in real life. Today, 8 oz Antique Finish Silver Dilophosaurus Statues are available to you online at Silver.com.

The Lost World Collection from Heads or Tales Coins & Collectibles is a series of silver for sale in the form of antique statues. The collection is one that is 65 million years in the making and features some of the most popular dinosaurs known to modern humans. Alongside the original Tyrannosaurus Rex, Triceratops, Stegosaurus, Brachiosaurus, and Ankylosaurus, you will now find the Velociraptor and Dilophosaurus statues.

All of the 8 oz Antique Finish Silver Dilophosaurus Statues available to purchase here at Silver.com come in brand-new condition from Hotco. The silver statues are individually packaged inside of cardboard shipping boxes with protective packaging materials around the statue inside of the box. The numbered Certificate of Authenticity is included in the box and each of the silver statues has laser-etched details on the base that include the serial number, weight, and purity. All of the statues have an antique polish that highlights the intricate details of the bar.

Standing 8.3 inches tall, the 8 oz Antique Finish Silver Dilophosaurus Statues depict the powerful and imposing Dilophosaurus. The specimen in this design element has its crest visible and is leaning on a dead tree trunk in the creation of the statue. The Dilophosaurus is depicted differently depending on the particular media in which you are engaging with the creature.

The Dilophosaurus in Jurassic Park is depicted as much smaller than the dinosaurs found in the fossil record. For example, the real-life fossils have measured 23 feet in length and were estimated to weigh up to 880 lbs. While the film depicts the Dilophosaurus with a retractable cowl that it would use to appear more imposing, paleontologists believe the Dilophosaurus actually had a cowl that was part of its skull and was not retractable.

If you have any questions, please feel free to contact Silver.com. You can call us on the phone at 888-989-7223, chat with us live online, or email us directly.