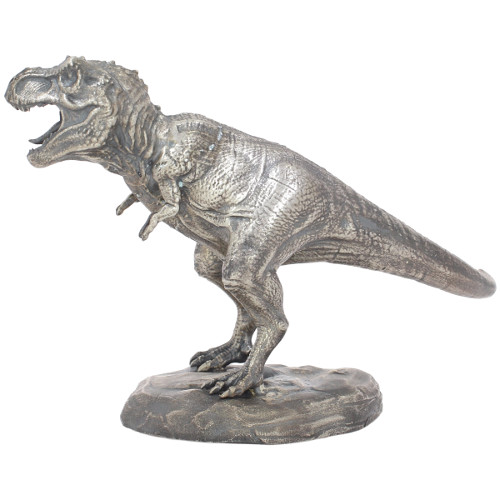 The T-Rex was a truly unique beast, with a massive skull on its body balanced out by a long, heavy tail. The powerful hind limbs were much larger than the short fore limbs, which were nonetheless unusually powerful for their size. Today, it is captured in a truly depiction as the center of the Lost World Collection with the 8 oz Antique Finish Silver T-Rex Statue online at Silver.com.

Your 8 oz Antique Finish T-Rex Silver Statue from this collection features a 7 cm tall depiction of the famous lizard king. Each statue has a proprietary antique finish that adds depth and warmth to the overall finish and appearance of the statue, which depicts the beast standing on its massive hind legs with its mouth agape as it unleashes its thundering roar.

The powerful hind limbs of the Tyrannosaurus Rex were much larger than their shorter fore limbs, which were nonetheless unusually powerful for their size. Although it is often depicted as an apex predator in films and other presentations, modern scientists are split on the actual role of the T-Rex in bygone eras. Some believe that it was in fact the most fearsome predator of the day, while it is believed by others to have been more of a scavenger that capitalized on the kills of other predators by scaring them off with sheer size and intimidation.

Known more widely as T-Rex, it is so-named the Tyrannosaurus Rex because it was believed to by the tyrant lizard king. Tyrannosaurus was Greek for “tyrant lizard,” while Rex is Latin for “king.” T-Rex lived throughout the continent of modern-day North America and on the island continent known as Laramidia, and has been found in fossil records dating to between 68 and 66 million years ago.

Every 8 oz Antique Finish Silver T-Rex Statue in this product listing ships to you secured inside of a protective box, to keep it safe during shipping and maintain its beautiful finish and design. Included with your purchase is a numbered Certificate of Authenticity. The individual mintage number of the statue is laser-etched onto the statue and reflected in the Certificate of Authenticity.

There are only 1,000 of these statues available from Heads or Tales Coin Company, so act fast! Please contact Silver.com with any questions you might have. You can reach our customer service team at 888-989-7223, connect with us online through our live chat, or simply send us an email. To see similar products, check out our full selection of Silver Statues.