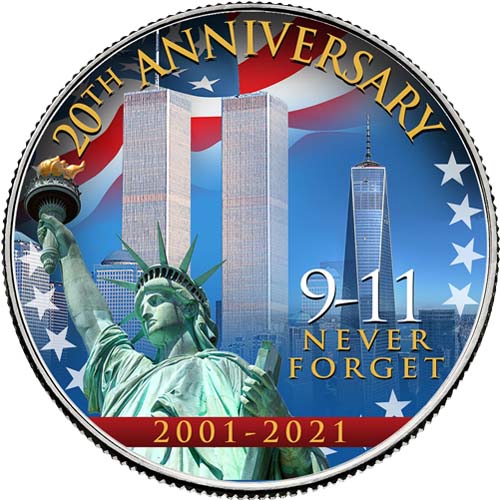 Introduced in 1964, the JFK Half Dollar is the most recently introduced US circulation design that is still in production on a large scale. The size and popularity of the half dollar make it an ideal piece to use in enhanced, commemorative designs from private mints. As 2021 marks the 20th anniversary of the 9/11 attacks on the United States, mints are producing affordable, enhanced collector pieces to mark the solemn occasion. Right now, 9/11 20th Anniversary JFK Half Dollars are available to purchase online at Silver.com.

Each 9/11 20th Anniversary JFK Half Dollar listed here is a legal tender coin from the United States Mint that has been enhanced with beautiful colorization by a private mint. The colorized field is limited to the obverse and covers the bust of President John F. Kennedy with images of the New York City skyline as it appeared before 9/11 and is now appears having been rebuilt. The coins come with protective capsules and a Certificate of Authenticity.

September 11, 2001, started out like any other fall day. Beautiful sunshine and warm weather greeted New Yorkers, but the splendor of the day didn’t last. Over the course of just a few hours in the morning, the Twin Towers in New York City were hit by airlines, the Pentagon in D.C. was attacked, and the passengers of another airliner forced their plane down in a field in Pennsylvania, thwarting another attack, but bringing the death toll to more than 3,000 Americans.

The obverse of the 9/11 20th Anniversary JFK Half Dollars comes with a colorized field overlaying the typical bust of President John F. Kennedy. This side depicts in beautiful colors the Twin Towers that once stood in New York City, as well as the new jewel of the Big Apple’s skyline, One World Trade Center.

On the reverse of 9/11 20th Anniversary JFK Half Dollars is a modified version of the US Presidential Seal. Based on the Great Seal of the United States and developed for the JFK Half Dollar in 1964, the design shows a bald eagle in front-facing relief with the olive branch of peace in one talon and the arrows of war in the other. It supports the US national shield on its chest.

If you have questions, Silver.com is here with the answers. You can call our team at 888-989-7223, chat with us live online, or simply send us an email with your inquiries.