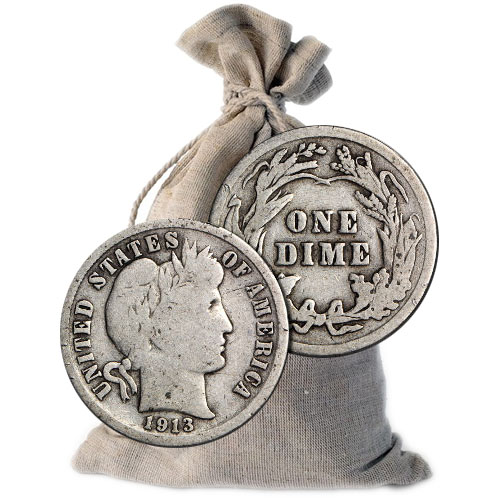 Charles E. Barber will forever be remembered as one of the most prolific Chief Engravers of the United States Mint. Though his designs were met with mixed reviews at first, his career was a long and fruitful one as the lead coinage designer at the US Mint in the late 19th and early 20th century. Today, 90% Silver Barber Dimes on Silver.com are available to purchase.

Each of the 90% Silver Barber Dimes on Silver.com here today are in Average Circulated condition. This is a general phrase that refers to coinage that has been used extensively as a medium of commercial exchange, resulting in wear and tear on the surfaces and extensive weathering of the features.

These 90% Silver Barber Dimes were produced between 1892 and 1916, and each year features .900 pure silver content with a 10% copper mixture. Barber Dimes were struck during their production run at the Denver, New Orleans, and San Francisco Mints, with specimens from the Philadelphia Mint lacking mint marks.

On the obverse of the 90% Silver Barber Dime is the image of Liberty in right-profile relief. His depiction of Liberty comes from ancient Greek and Roman sculptures of Libertas, the goddess of freedom. She is depicted in a Phrygian cap, laurel wreath with a ribbon, and a headband with “Liberty” engraved upon it.

The reverse of Barber Dimes includes a design that was little changed from the Seated Liberty dimes that had been in circulation since 1837. It includes a wreath secured at the bottom with a ribbon and opens at the top, with the engraving in the center of the face value of the coin. In this case, it reads “One Dime.”

All 90% Silver Barber Dimes were created by Charles E. Barber, who was Chief Engraver from 1879, succeeding his father William Barber in that position, until his own death in 1917. Barber was, oddly enough, succeeded in the position by George T. Morgan, the man behind the famous Morgan Silver Dollar design.

Silver.com customer service is standing by to answer any of your questions. Please feel free to contact our team at 888-989-7223, reach out to us online using our live chat, or simply send us an email.