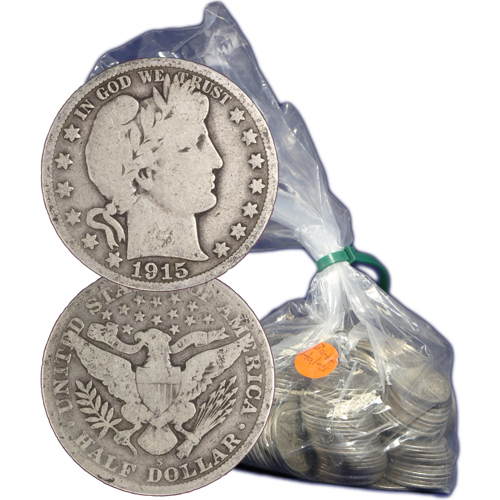 The Barber Coinage is a term used to refer to the US dime, quarter-dollar, and half-dollar coins struck by the United States Mint between 1892 and 1916. These coins were all designed, obverse and reverse, by then-Chief Engraver of the United States Mint, Charles E. Barber. Today, the 90% Silver Barber Half Dollar is available to purchase online at Silver.com.

Charles E. Barber’s coin designs began to emerge from the US Mint in circulation in 1892, with the same obverse design of the Head of Liberty on the dime, quarter, and half-dollar coins. The reverse was the same on the quarter dollar and half dollar, but the dime had only a wreath with the face value.

Barber is remembered today for his beautiful designs, even if they were met with mixed reviews at the time. Astonishingly, his dime, quarter, and half dollar images were all replaced in 1916 by US Mint designs that would go on to become three of the most iconic in American history.

90% Silver Barber Half Dollar coins were replaced by Adolph A. Weinman’s Walking Liberty design, while the dime was replaced by the Mercury Dime from Weinman and Hermon Atkins MacNeil’s Standing Liberty replaced the Barber Quarter design.

On the reverse of all Silver Barber Half Dollar Coins was the image of the Heraldic Eagle of the United States. It featured the American bald eagle with a ribbon banner in its beak that read “E Pluribus Unum,” while its talons clutched an olive branch and arrows.

The obverse of 90% Silver Barber Half Dollar Coins includes the right-profile portrait of Liberty, known as the Head of Liberty. She is depicted wearing a laurel wreath with ribbon, and a headband that includes “Liberty” engraved upon it.

All 90% Silver Barber Half Dollar coins in this listing feature .900 silver content and 10% copper, the standard for US coinage until the passage of the Coinage Act of 1965. These coins were struck by the San Francisco, New Orleans, and Denver Mints with mint marks, and the Philadelphia Mint with no mint marks.

Please direct your questions to a Silver.com associate at 888-989-7223. You can also reach out to us online through our live web chat and email features.