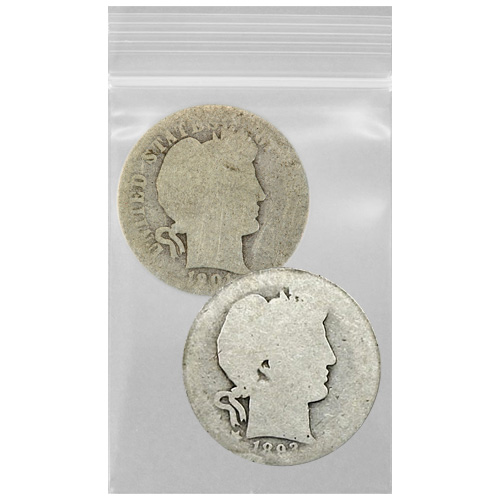 Only two individuals in United States Mint history have gone down in history with their names associated with circulation coin program designs. The first was George T. Morgan who designed the Morgan Silver Dollar produced from 1878 to 1904. The second was Charles E. Barber, 6th Chief Engraver of the United States Mint, who created the shared images of the dime, quarter, and half dollar used from 1892 to 1916. Now, 90% Silver Barber Halves with a total $1 Face Value are available to you for purchase online at Silver.com.

Charles E. Barber is part of the only father-son duo to hold the position of Chief Engraver of the United States Mint. Not only did Barber and his father, William Barber, both hold the same bust, but the duo held the post in successive order with Charles replacing his father in the role upon the elder Barber’s death.

The obverse face of all 90% Silver Barber Halves includes a right-profile bust of Lady Liberty. This bust of Liberty was created by Barber in 1892 and featured on the dime, quarter, and half dollar in this series through 1916. The bust of Liberty showcases her figure with a crown wreath and a cap keeping her hair up in a bun.

These 90% Silver Barber Halves are available to you with a total face value of $1 (USD). The coins are packaged together in pairs inside of a plastic bag. Individual coins are all cull specimens with heavy wear and tear, as well as other signs of obvious damage. This can include severe damage such as holes, bends, or deep scratches. Please note your bag may contain coins with matching dates or different dates. All date marks will be between 1892 and 1916.

Silver.com customer service is available to assist you at 888-989-7223. You can also chat with us live online through our email address and live chat.