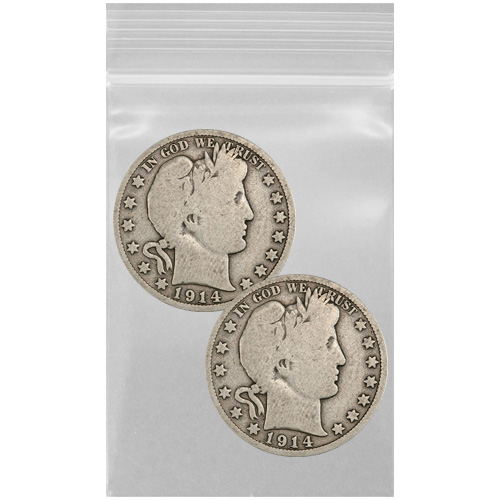 Designed in 1892, the Barber Coinage is a term that refers to the US dime, quarter, and half dollar produced by the United States Mint between 1892 and 1916. The coins were available with 90% silver content, and 10% copper for durability, and represent an affordable option for any investor looking to buy bulk silver that comes with lower premiums. Now, 90% Silver Barber Halves in Good+ condition are available to you for purchase online at Silver.com.

His design of Liberty was used on the obverse of all three coins in the range: dime, quarter, and half dollar. He created two separate designs for the reverse as the dime had a much smaller surface area than the quarter and half dollar. While the two larger denominations shared a design of the heraldic eagle, the dime had only the face value and a wreath inscribed.

The obverse side features a bust of Liberty in right-profile relief. His portrait of Liberty includes a wreath crown on her head that is tied off at the back. The inscriptions on this face of the coin include the word “Liberty” and a date mark at the bottom, as well as 13 stars around the outer field of the coin.

On the reverse face of the coin is an image of the heraldic eagle of the United States. The eagle here is featured with a small national shield on the bird’s chest, arrows of war in one talon, and the olive branch of peace in the other talon. A half-moon set of 13 stars is found above the bird with a banner in his beak that reads “E Pluribus Unum.”

These 90% Silver Barber Halves are available in a protective plastic bag. Two coins are available for a total face value of $1 (USD) with each coin containing 90% silver. Date marks range from 1892 to 1916, and Silver.com cannot guarantee the dates on the coins you receive through this listing. All coins are in Good-plus condition, indicating that each is quite worn, but still has its major designs visible.

Silver.com customer service is available to you at 888-989-7223 to help answer questions. You can also connect to us on the web through our live chat and send us an email with your inquiries.