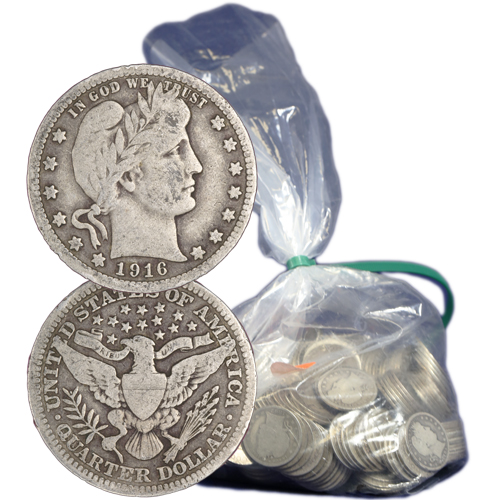 No Chief Engraver at the United States Mint has quite the legacy of Charles E. Barber. Born in the United Kingdom and the only Chief Engraver to succeed his own father in the position, Barber designed the images used on the country’s dime, quarter, and half-dollar coins in circulation from 1892 to 1916. Right now, 90% Silver Barber Quarters are available online at Silver.com.

Prior to 1965 and the Coinage Act of 1965’s passage, all American coins were struck using a combination of .900 (90%) silver content and a 10% inclusion of copper. Historic US coinage, even those used in circulation, all included a minimum of .900 pure silver.

The 90% Silver Barber Quarters available in this Silver.com listing all feature that 90% silver, 10% copper mixture. Struck between 1892 and 1916, these quarters shared an obverse design with the US dime and half-dollar coins of the era, all of which were designed by then-US Mint Chief Engraver Charles E. Barber.

On the obverse of all Silver Barber Quarters is his right-profile depiction of Liberty. Known as the Head of Liberty, this design replaced the 1830s design of Seated Liberty from Philadelphia Mint engraver Christian Gobrecht, which had been on US currency from 1837 until 1891/92. IT depicts Liberty wearing a laurel wreath on her head, with a headband that includes the word “Liberty.”

The reverse design from Barber on the US Quarter of the day was featured only on the quarter and half dollar in the Barber coinage. It was based upon the Great Seal of the United States and referred to as one of the iterations of the Heraldic Eagle of the United States. The bird is featured in frontal profile holding an olive branch in one talon and arrows in the other.

All 90% Silver Barber Quarters in this product listing are in average circulated condition. Coins in this condition were used for commercial exchange in circulation, and as such have extensive wear and tear on the surfaces and design sets. 90% Silver Barber Quarters were produced, with mint marks, at the Denver, New Orleans, and San Francisco Mints. Additionally, they were struck at the Philadelphia Mint without mint marks.

If you have any questions, don’t hesitate to ask. Silver.com customer service is available at 888-989-7223, online through our live chat, and via our email address.