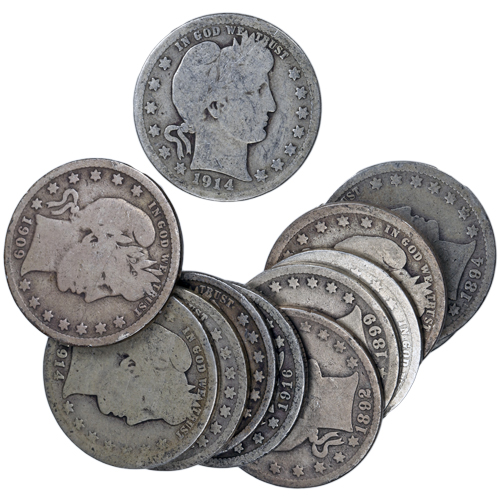 The use of 90% pure silver content in American coinage was popular from the introduction of new silver dollars in 1876, and continued for nearly a century before the US Mint put a stop to the use of such pure silver in its coinage. The Barber Coinage of the late 19th century and early 20th century was one of the last comprehensive coinage programs from the mint to feature 90% silver content. The 90% Silver Barber Quarter is available today from Silver.com.

Charles E. Barber was at the helm as Chief Engraver of the United States Mint at a point in history when the mint would see the most upheaval in coin design to date. Looking for new life in American coin design, a movement started in 1890 to hold an open competition for public artists to submit new designs for the nation’s dime, quarter dollar, and half dollar coins.

At the end of the competition, it was actually the designs of Barber that would be chosen for all three denominations. Barber’s design for the obverse of all three coins in question was the same; that of Liberty’s head. It was to take the place of the Seated Liberty design in use on all three denominations since Christian Gobrecht, an engraver at the Philadelphia Mint in the 1830s. created them.

90% Silver Barber Quarters were in circulation in the United States from 1892 until 1916, when a redesign phase was initiated that saw Hermon Atkins MacNeil’s Standing Liberty design take over on the obverse of the US Quarter. All 90% Silver Barber Quarters have .900 silver content, 10% copper, and were struck at Philadelphia (no mint mark), Denver, New Orleans, and San Francisco.

On the obverse of each coin is Barber’s Head of of Liberty design. It includes a right-profile portrait of Liberty wearing a laurel wreath, ribbon, and head band, and she is surrounded by the 13 stars representing the original American colonies.

The reverse is shared with the Silver Barber Half Dollar coin, and includes the Heraldic Eagle of the United States, which itself is adapted in this use from the Great Seal of the United States. These coins are all in average circulated condition, indicating they were used in commercial transactions and feature wear and tear on their surfaces.

Please submit your questions to Silver.com at 888-989-7223. You can also connect with us online through our live web chat and email features.