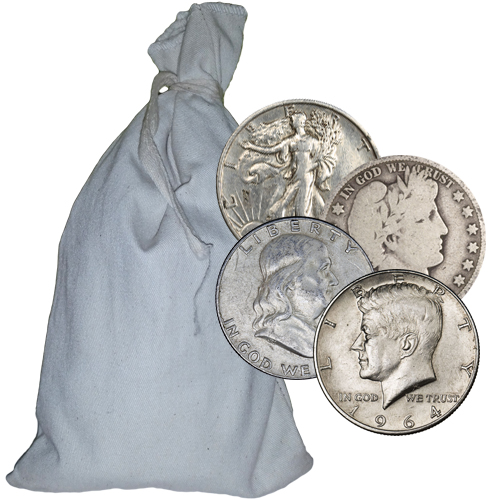 The first thought of many new investors in the precious metals marketplace often strays toward silver bullion options like the Silver American Eagle or Silver Canadian Maple Leaf. Prior to 1964, all US circulation coins were struck with 90% silver content, making remaining specimens an excellent investment option for those looking to get started in precious metal investing. Today, a collection of 90% Silver Coins is available in half-dollar denominations on Silver.com.

These 90% Silver Coins have .900 silver content, a feature not currently found in American coinage anymore. US coins abandoned the use of any silver in coinage following passage of the Coinage Act of 1965, which established new metal alloy combinations for American coins. The Coinage Act of 1965 shifted silver coining in the US away from a 90/10 silver/copper content, to a copper “sandwich” that featured a pure copper center and outer layers made of a cupronickel that contained a copper-nickel alloy.

In this product listing, you’ll receive a total of 200 individual US half-dollar coins, in circulation anywhere from 1892 and the introduction of the Barber Coinage to 1964, when the first Kennedy Half Dollars appeared during the final year of .900 silver striking by the United States Mint. Silver.com cannot  guarantee any of the specific designs you’ll find in the bag, but can guarantee a total of $100 (USD) face value in the half-dollars you receive.

Examples of half-dollar designs potentially included in this listing feature the Barber, Walking Liberty, Franklin, and Kennedy half dollars. The Barber Half Dollar appeared in 1892 and ran through 1916, and was designed by US Mint Chief Engraver Charles E. Barber. He designed the nation’s dime, quarter, and half dollar that year, and was the last Chief Engraver to design circulation coinage until the Kennedy Half Dollar came out.

Please direct your questions to a Silver.com associate at 888-989-7223. You can also reach our customer service team on the web using our live chat and email features.