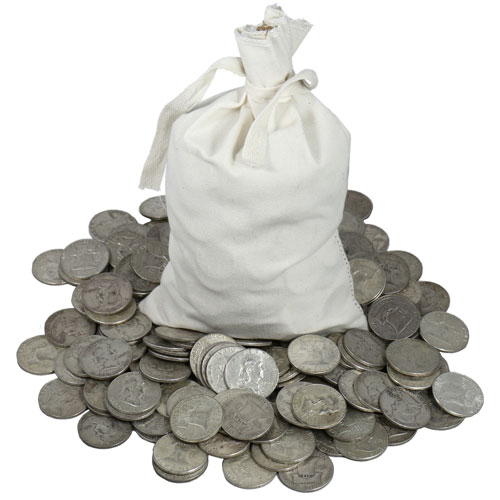 Any quantity available for $8.79 per oz over spot!

America’s Founding Fathers often found themselves deeply involved in the formation and guidance of the early democracy. While many of them were leading figures during the Revolutionary War and later held officials posts in the new government, Benjamin Franklin was a notable exception. Despite never holding public office in the nation’s new government, Franklin is nonetheless featured on numerous forms of currency. One of the most popular is the 90% Silver Franklin Half Dollar. These coins are available from Silver.com in average, circulated condition in $100 face value bags. Consequently, each bag has a total of 200 coins.

The Franklin Half Dollars were minted by the United States Mint between 1948 and 1963. Franklin’s portrait found its way onto official currency courtesy of Nellie Tayloe Ross, the US Mint director at the time. An admirer of the founding father, Ross directed the Mint’s chief engraver (John R. Sinnock) to create an image of Franklin for use on the coin. The coins have a silver content of 90% and were no longer produced following 1963 as a result of the rising spot value of silver, dwindling supplies, and the assassination of President John F. Kennedy. His image replaced Franklin’s on the half dollar in 1964.

On the obverse side of the coin is Franklin’s right-profile portrait image. Engravings include the year of minting, and the words “Liberty,” and “In God We Trust.” The reverse side of the coin includes the famous Liberty Bell, with engravings that state “United States of America,” “Half Dollar,” and “E Pluribus Unum.” In an odd twist, a small eagle was stamped next to the Liberty Bell to meet the requirement that an eagle appear on all half-dollar coins.

Silver.com is dedicated to your happiness as a shopper. If you have any questions about the 90% Franklin Half Dollars ($100 Face Value), other products, or the online purchasing process, don’t hesitate to contact our associates at 888-989-7223. You can also connect with us online using our free web chat service.