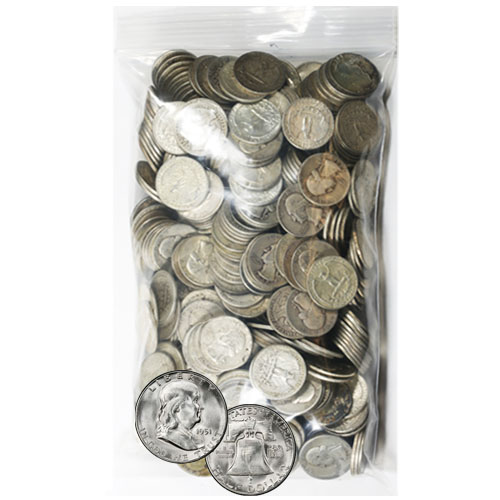 Any quantity available for $7.95 per oz over spot!

From 1916 to 1947, the iconic Walking Liberty design had featured on the US Half Dollar. By the 1940s, the time had come for a new design on the coin as the US Quarter and US Dime, redesigned at the same time 1916, had already seen new designs come to the denominations. Founding Father Benjamin Franklin was chosen to feature on the coin.

Only one other major US denomination prior to this had featured design elements not depicting Lady Liberty and/or the American bald eagle prior to the release of the Franklin Half Dollar. That was the Buffalo Nickel issued in 1913 with the stoic Native American on the obverse and the American bison on the reverse.

Benjamin Franklin is depicted on the obverse of all of the 90% Silver Franklin Half Dollar Coins in this product listing. Franklin is shown in right-profile relief with inscriptions of the date of issue, the national motto, and the word “Liberty” featured around his bust.

The Liberty Bell from Philadelphia, a city deeply connected to Benjamin Franklin, is featured as the primary design element on the reverse of the 90% Silver Franklin Half Dollars. The Liberty Bell dominates the design field in the center, but it is accompanied by an image of the heraldic eagle to the lower right. An 1890 US statute mandates that all half-dollar coins in the US feature the American eagle, so the addition of the heraldic eagle to this side was made to comply with the law.

These 90% Silver Franklin Half Dollars are available to you in a bag totaling $500 (USD) in all with 1,000 US Half Dollar coins included. Each one has 90% silver content and bears a date mark between 1948 and 1963. Please note that your bag is likely to contain varying date marks.

Silver.com customer service is available to assist you on the phone at 888-989-7223. You can also chat with us live online or email us directly.