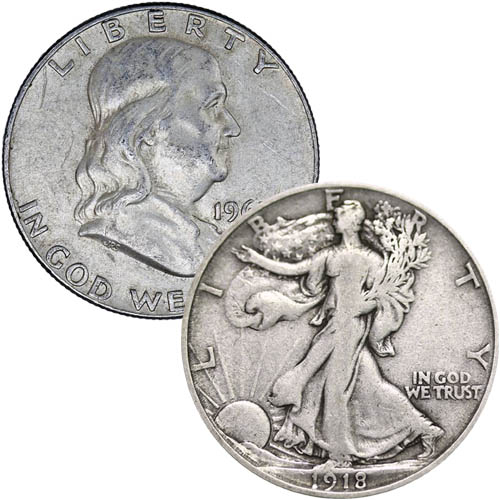 The US Half Dollar is one of the nation’s longest-running circulation coin series. The 50-cent piece was introduced in 1794 with the then-popular Flowing Hair Liberty design and went on to use designs such as the Draped Bust and Capped Bust Liberty designs through 1839. This series has featured some of the most beautiful coin designs in US history and many of them, up to 1964, include 90% silver content. Right now, 90% Silver Half Dollars are available to purchase online at Silver.com.

The Barber Coinage was a wide-ranging series of dimes, quarters, and half-dollars from the United States Mint with a right-profile portrait of Liberty’s head that had a Greco-Roman look to Liberty’s facial features. This coin was available from 1892 to 1915. Walking Liberty was created by Adolph A. Weinman and featured on the half dollar from 1916 to 1947. This is one of the most popular coin designs in American history.

Following the Walking Liberty series, the half dollar received portraits of two American statesmen. The first was the Benjamin Franklin Half Dollar with a portrait of the Founding Father and American diplomate on the obverse. These coins were available from 1948 to 1963. President John F. Kennedy was swiftly added to the half dollar following his November 1963 assassination and his portrait debuted on the coins in March 1964. This is the last year the US Mint issued 90% silver coins for circulation.

Reverse designs for many of these coins feature some variation of the heraldic eagle of the United States or the Great Seal of the United States of America. The Walking Liberty Half Dollar, for example, has the image of an American bald eagle perched on a mountaintop cliff instead, while the Franklin Half Dollar focuses more on the Liberty Bell with a small heraldic eagle.