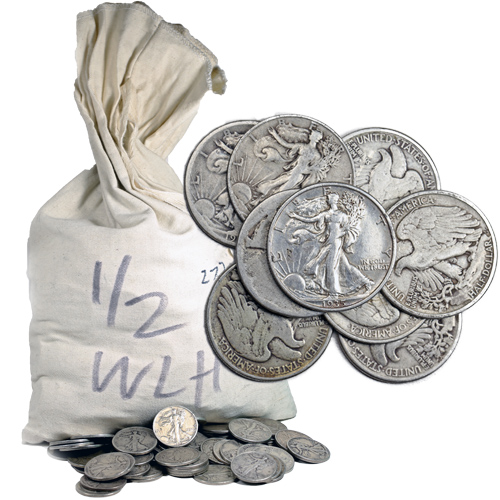 Any quantity available for $9.89 per oz over spot!

For those investors, and even collectors, not interested in paying the higher premiums associated with premium bullion and proof coinage bearing iconic imagery, it is still possible to get involved in precious metal investing and collecting. 90% Silver coins from previous circulation in the United States are an excellent, affordable option. Today, 90% Silver Coins are available to purchase online at Silver.com.

US coinage abandoned the use of 90% silver starting in 1964, and there were various reasons behind this move. First among those reasons was the rising cost of producing coins with such a high silver content. For many US coins, the face value of the coin was much lower than the value of the silver content within the product. The cost of producing those coins exceeded their value in the American economy.

Part of the reason for the rising price of silver was a lack of availability, which also made it difficult to strike coins in the volume needed to support circulation currency. Lastly, coins with a high silver content (similar to gold coins) don’t hold up well over time when handled and circulated within the market.

Examples of possible 90% Silver Coins with an individual face value of $.50 include the Barber Half Dollar, Franklin Half Dollar, and the first-year issue of the Kennedy Half Dollar. Struck between 1892 and 1916, these 90% Silver Barber Half-Dollar coins in this $10 (USD) roll are in circulated condition, which means you’ll notice signs of usual wear and tear on the coins themselves.

US Mint Director Nellie Ross pushed for Franklin’s inclusion on the Half Dollar in 1946 as the Walking Liberty Half Dollar design came to the end of its circulation life. The Franklin coin was introduced in 1946, and was the last US Half Dollar coin design to see its entire design run include 90% pure silver content.

In this product listing you can purchase a canvas bag containing a total of 1,000 US 50-cent pieces, for a total face value of $500 (USD) that is fully backed by the government of the United States. Referred to often as junk silver, these coins have varying conditions because they were previously in circulation, and are much more affordable than other silver coins with .999 silver content or greater.

Please direct your questions to Silver.com at 888-989-7223, or connect with us online through our live chat and email features.