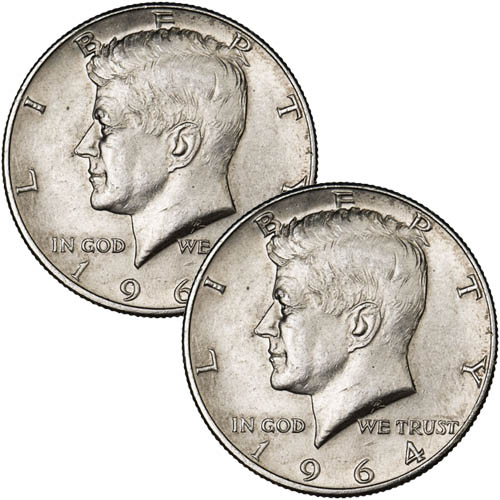 The most recent design introduced on the US half-dollar circulation coin is that of President John F. Kennedy. The Kennedy Half Dollar design replaced the Benjamin Franklin issue and was conceived of and introduced on the coin within four months of President Kennedy’s assassination while in office. Right now, 90% Silver Kennedy Half Dollars are available to purchase online at Silver.com.

Each 90% Silver Kennedy Half Dollar $1 Face Value offering in this listing comes with a small plastic bag containing two individual half-dollar coins. Both coins have the bust of President John F. Kennedy on the obverse and a modified version of the presidential seal on the reverse. 90% silver coins in the Kennedy Half Dollar range include only the 1964 date mark.

The United States Mint long used 90% silver in its silver coins, including dimes, quarters, and half-dollars. The 1964 date for all circulation silver coins marked the last time that circulating coins in the United States had 90% silver content. The Kennedy Half Dollar series was the only coin to continue using larger silver content after 1964. While all other coins went to the modern cupro-nickel mixture in 1965, the Kennedy Half Dollars continued to use 40% silver in circulation from 1965 to 1970 before also switching to cupro-nickel.

On the obverse of 90% Silver Kennedy Half Dollars is the left-profile portrait of President John F. Kennedy. One of America’s most beloved presidents of the 20th century, Kennedy was assassinated in November 1963 and within four months had his bust on the half-dollar coin. The design from Gilroy Roberts was already in the US Mint’s possession as it had featured on the Presidential Medal earlier in Kennedy’s administration.

The reverse face of 90$ Silver Kennedy Half Dollar Coins includes a modified version of the presidential seal. Frank Gasparro created this design and it had also previously appeared on the John F. Kennedy Presidential Medal along with Roberts’ bust of Kennedy.

The first Kennedy Half Dollars were struck at the Denver Mint in late January 1964 and then at the Philadelphia Mint within a week.