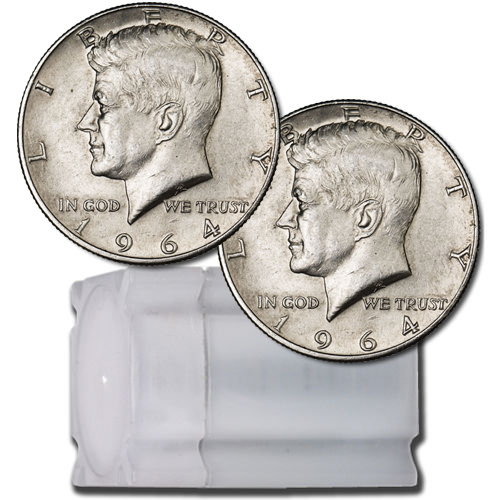 President John F. Kennedy was the youngest man ever elected to the nation’s highest office, and became the first Catholic American to hold the post as President of the United States. He was young and charismatic, but his term ended tragically when he was assassinated in 1963. Less than a year later, the nation’s half-dollar coin was revamped to honor the fallen leader. The 90% Silver Kennedy Half Dollar is available on Silver.com in $10 rolls with 1964 issue marks.

There are many factors about the 90% Silver Kennedy Half Dollars in this Silver.com listing that make them unique and special. First and foremost, these were the last half dollars ever struck by the United States Mint to feature 90% silver content. The following year, 1965, the Mint lowered the silver content to a maximum of 40%.

Of greater significance, this was also one of the fastest turnarounds in coin design ever introduced by the US Mint. President Kennedy was assassinated in Dallas, Texas in November of 1963. The first Kennedy Half Dollar coins were struck starting in late January 1964, just three months later.

On the obverse side of the 90% Silver Kennedy Half Dollar coins you’ll find the left-profile portrait of President John F. Kennedy. It includes engravings of the year of issue below and the word “Liberty” above.

The reverse of the Kennedy Half Dollar features a modified version of the Seal of the President of the United States. Included in the image is the American bald eagle, along with its traditional arrows of war and olive branch of peace clutched in its talons.

If you have any questions about this product listing, please feel free to contact Silver. You can reach our customer service team on the phone at 888-989-7223, online using our live web chat, and via our email address. Check out our full selection of Junk Silver to see similar products.