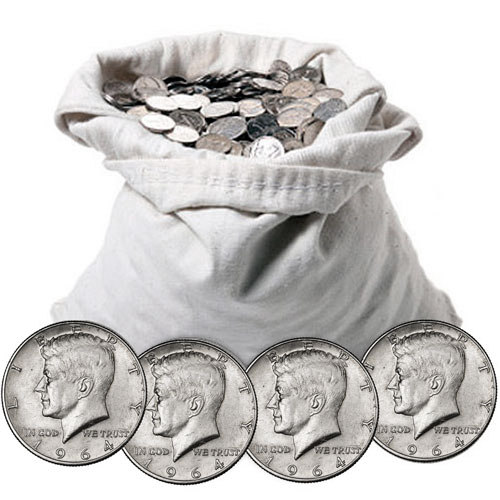 Any quantity available for $10.24 per oz over spot!

Between 1796 and 1964, most circulation coins minted by the United States Mint contained at least 90% silver. Throughout American history, coins have contained the images of some of the nation’s most respected leaders. Men like Benjamin Franklin, George Washington, Thomas Jefferson, and Abraham Lincoln have been on American coins for decades now. One of the more recent additions to American coins was President John F. Kennedy.

President John F. Kennedy was assassinated in Dallas on November 22, 1963. Within hours of his death, the US Mint had begun contemplating placing Kennedy’s image on one of the nation’s larger circulation coins. The silver dollar, half dollar, and quarter were under consideration by Mint Director Eva Adams. It was eventually decided, with the help of First Lady Jacqueline Kennedy, to place President Kennedy’s image on the half dollar. His image replaced Benjamin Franklin on the coin, but it was deemed a better choice than replacing George Washington on the quarter.

The first 90% Silver Kennedy Half Dollars were struck and released in January 1964. Almost immediately, the coins were nonexistent in circulation because Americans began collecting the coins as a memento of the late president. The designs on the coin featured earlier works from the US Mint’s chief engraver, Gilroy Roberts, as well as Frank Gasparro.

On the obverse side of the 90% Silver Kennedy Half Dollars is the left-profile portrait of President John F. Kennedy. His image is surrounded by the engravings “Liberty,” “In God We Trust,” and the year of minting. On the reverse side is a modified Seal of the President of the United States. Engravings on this side of the coin include “United states of America,” “Half Dollar,” and “E Pluribus Unum” on the wreath in the eagle’s beak.

If you have any questions about the 90% Silver Kennedy Half Dollars ($100 Face Value), or other Silver.com products, simply call us at 1-888-989-7223. You can also speak with a representative directly on our website through the live chat feature located on our contact page. 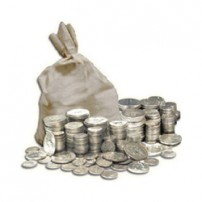