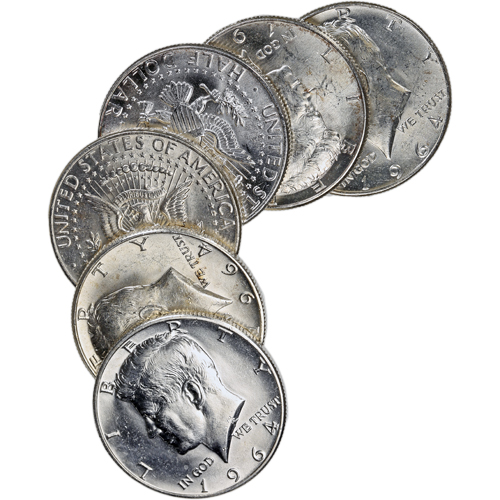 President John F. Kennedy was one of America’s most popular leaders ever, and his death in 1963 by an assassin’s bullet shook the nation to its core. He was almost immediately honored with a spot on US currency. To this day, he remains the face of the US half dollar coin. Right now, 90% Silver Kennedy Half Dollars are available to purchase from Silver.com.

John F. Kennedy wasn’t just the first Catholic elected President of the United States, or the youngest man to hold the office, he was a war hero from the US Navy in World War II and looked to as a guiding force for a positive future in the United States. His accomplishments were brief, but significant.

He stared down the Soviet Union’s Nikita Khrushchev as the Cold War heated up over Soviet ballistic missiles in Cuba, and led the charge to put an American not just in space, but on the moon. His life was tragically cut short when he was assassinated in Dallas, Texas on November 22, 1963.

Almost immediately afterward, the US Mint began to create designs for the US Half Dollar coin. 90% Silver Kennedy Half Dollar coins emerged within three months of the president’s assassination, leaving US Mint facilities in January 1964. Kennedy’s effigy replaced that of Benjamin Franklin on the half dollar.

These early 90% Silver Kennedy Half Dollar coins are extremely difficult to come by. Early hoarders and investors held onto the coins released in 1964, not only as a memento of the late president, but also because they were the only year of issue in the Kennedy Half Dollar that would feature 90% silver content.

On the obverse side of the coin is the image of John F. Kennedy, captured in left-profile relief by Gilroy Roberts, Chief Engraver of the United States Mint at the time. It features only the word “Liberty” and the year of issue.

The reverse was designed by Frank Gasparro and replicates a modified version of the presidential seal, which includes the heraldic eagle of the United States clutching its olive branch of peace and arrows of war in its talons.

If you have any questions, please don’t hesitate to ask. Silver.com customer service associates are available on the phone at 888-989-7223, online using our live web chat feature, and via our email address.