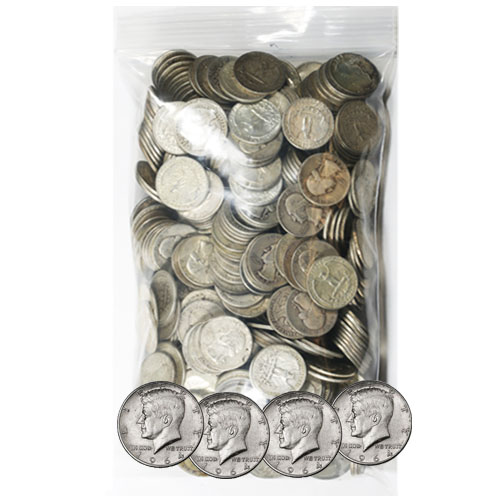 The Kennedy Half Dollar coin program is one of the more distinctive in American history. The coins were introduced at the very end of 90% silver coining in the US and offer only one date mark in the 90% silver era. However, unlike the dime and quarter, the series did not immediately shift over to the modern cupro-nickel alloy. Today, 90% Silver Kennedy Half Dollars are available to you online in $500 Face Value lots at Silver.com.

All of the 90% Silver Kennedy Half Dollars in this $500 Face Value lot have the aforementioned silver-copper mixture. For more than a century and a half, the US Mint used this metallic mixture to create durable coins for circulation. By the 1960s, however, silver had become too valuable to continue using on coins with such low face values. The bag you receive in this listing will feature 1,000 US Half Dollars, all with the Kennedy design and a 1964 date mark.

President John F. Kennedy is featured on the obverse of 90% Silver Kennedy Half Dollars in a left-profile bust from Gilroy Roberts. The design includes the word “Liberty” above his head, “In God We Trust” on either side of the neckline in the bust, and the date below.

A modified Presidential Seal inspired by the heraldic eagle is showcased on the reverse side of the 90% Silver Kennedy Half Dollar. This design includes the heraldic eagle image with a ring of 50 stars around it and the inscriptions “United States of America” and “Half Dollar.” Denver Mint and San Francisco Mint coins will feature a “D” or “S” mint mark, respectively, on this side below the eagle’s talon holding the olive branch.

Please don’t hesitate to contact Silver.com with questions. You can call us at 888-989-7223, chat with us live online, or email us directly.