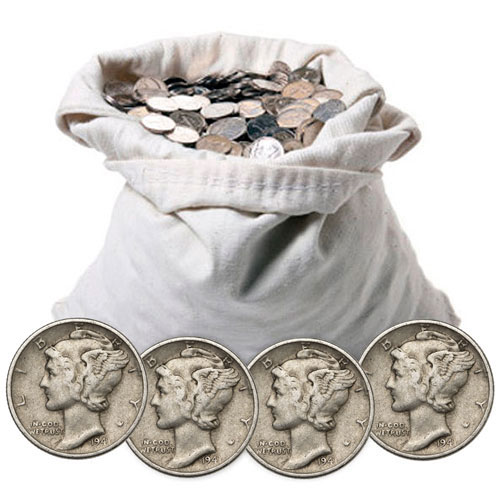 Any quantity available for $9.01 per oz over spot!

These 90% Silver US Mercury Dimes are available in $100 face value bags. The Mercury Dime is among the US Mint’s most popular 10¢ coin designs and was minted from 1916-1945. Each bag contains 1,000 coins for a total pure silver weight of approximately 71.5 troy ounces. The coins in each bag will be in varied condition.

For the majority of American history, the United States Mint produced circulation and commemorative currency for the federal government with high precious-metal content levels. Most notable among circulation coins are those containing 90% silver. Among the more popular circulation coins from the early-20th century is the 90% Silver Mercury Dime. Now, you can purchase one of these historic coins from Silver.com in varied conditions.

Between 1796 and 1964, the vast majority of circulation currency in the US contained 90% silver. One of the more popular dimes during this period was a coin known as the Mercury Dime. The coin was minted between 1916 and 1945, and was put into circulation by the US Mint to replace the outgoing Barber Dimes, which were in circulation from 1892 to 1916.

Mercury Dimes were officially known as Liberty Dimes because the obverse side of the coin included a left-profile depiction of Lady Liberty with a winged cap on her head. The image reminded people of the Roman goddess Mercury, and so people began to refer to the dime as the Mercury Dime instead.

On the obverse side of the 90% Silver Mercury Dime is the image of Lady Liberty. Wearing a winged cap, her image is surrounded by the engravings “Liberty,” “In God We Trust,” and the specific year of minting. On the reverse side, a bundle of rods surrounds an axe, with a wreath wrapping around the bundle. Engravings include “United States of America,” “One Dime,” and “E Pluribus Unum.”

These coins hold a special place in American history because of the circulation period they were distributed during. Many of these dimes were likely part of the “March of Dimes” drive to help raise money to find a cure for polio. An effort that was eventually successful.

The United States Mint operates four primary minting facilities across the country. Originally founded in 1792, the US Mint is one of North America’s oldest facilities. Today, it serves as the primary mint for the federal government.

If you have any questions about our 90% Silver Mercury Dimes ($100 Face Value), or other products on Silver.com, simply call us at 1-888-989-7223. You can also get in touch with a representative online through the website’s live chat feature. 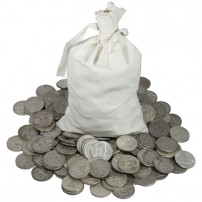