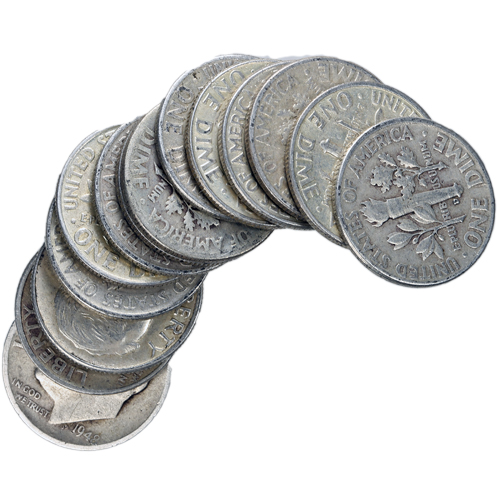 Franklin D. Roosevelt is simultaneously one of the most beloved, and somewhat controversial, US Presidents in the nation’s history. The man who led the country through World War II, he also defied a precedent nearly 200 years in the making by refusing to walk away from the office and serving four terms. He is remembered on the 90% Silver Roosevelt Dimes, available right now on Silver.com.

The image of Franklin D. Roosevelt used on the American dime was introduced on January 30, 1946, just months after the president died in office during his fourth term as President of the United States. His image is the 7th to appear on the US Dime since its 1796 introduction as a means of currency, and is now the longest running design, surpassing the 54 years of the Seated Liberty dime.

What makes these 90% Silver Roosevelt Dimes unique in this product listing is their 90% silver content. All US currency struck after 1964 features a pure copper inner layer with a “sandwich” of cupronickel on the two outer layers, which contains 75% copper and 25% nickel. These 90% Silver Roosevelt Dimes available from Silver.com include 90% pure silver and just 10% copper, and all were struck between 1946 and 1964.

On the obverse of the Roosevelt Dime is a left-profile portrait of President Roosevelt created in late 1945 by Chief Engraver John R. Sinnock. He became the first US Mint employee to create a circulation coin design in more than 40 years.

The reverse of the 90% Silver Roosevelt Dime includes a design that was also created by Sinnock. This image includes the torch of freedom in the center, flanked by the olive branch of peace and the oak leaves of civic achievement on either side. The nation of issue, face value, and phrase “E Pluribus Unum” are engraved around the outside edges.

90% Silver Roosevelt Dimes have been produced by only three of the US Mint’s four facilities; the Philadelphia Mint, Denver Mint, and San Francisco Mint. The West Point Mint did not participate in production until after the cessation of 90% silver content in coining.

If you have any questions, please don’t hesitate to ask. Silver.com customer service is available at 888-989-7223, online through our live chat, and via our email address.