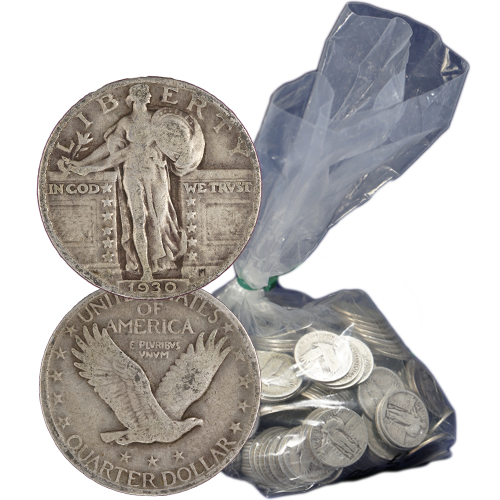 Pre-1965 coinage in the United States remains a popular item for investors because the nation’s silver coins still featured .900 silver content at the time. The Coinage Act of 1965 removed 90% silver from US coins, pushing most down to a maximum of 40% and instituting the use of cupronickel alloys in many others. Right now, the 90% Silver Standing Liberty Quarter is available online at Silver.com.

Hermon Atkins MacNeil’s design for the US Quarter in 1916 was one of two finalists, along with a creation from Adolph A. Weinman, whose designs ended up as the face of the US dime and US half-dollar coins for decades to come. MacNeil’s Standing Liberty design replaced the Liberty Head design in the Barber coinage series.

Several small changes were made over time to both the obverse and reverse designs of the 90% Silver Standing Liberty Quarters. MacNeil’s original Liberty depiction featured the goddess of freedom with a bare chest. First, chain mail armor was added after the 1916 release, then replaced itself by a chain mail plate from 1917 onward. The American bald eagle on the reverse was originally surrounded by 13 stars, but in 1917 the image was adapted to feature 5 stars on either side and 3 directly below the eagle.

On the obverse of the 90% Silver Standing Liberty Quarter is Hermon Atkins MacNeil’s depiction of Standing Liberty. This design featured on American quarters from 1916 to 1930, and was replaced in 1932 by the current left-profile portrait of George Washington.

The reverse side of the coin includes the American bald eagle in flight, with its wings spread wide. The nation of issue, face value, and the phrase “E Pluribus Unum” are all engraved on this face of the coin.

Standing Liberty quarters were produced by the Denver and San Francisco Mints, with “D” and “S” mint marks (respectively” in the lower left-hand column in the wall on the obverse. Philadelphia Mint coins have no mint mark.

We encourage Silver.com customers to contact us at 888-989-7223 with any questions. You can also reach out to us online through our live web chat and email features.