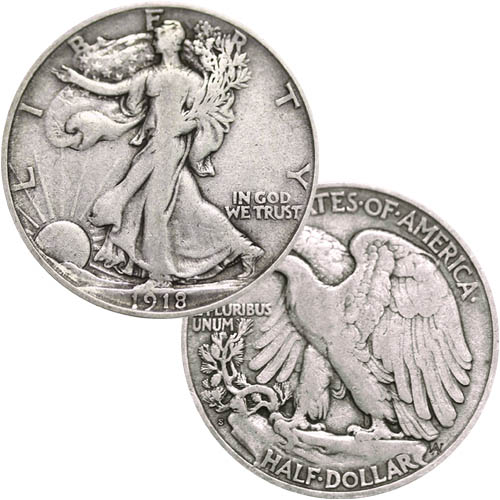 One of the most beautiful designs ever to feature on a circulation American coin is that of Walking Liberty. Now the popular face of the Silver American Eagle Coins, the Walking Liberty design was originally used on the US half-dollar coin from 1916 to 1947 and was designed at the time by Adolph A. Weinman. Now, 90% Silver Walking Liberty Half Dollars are available to you for purchase online at Silver.com.

Adolph A. Weinman created the design known as Walking Liberty for the US half-dollar circulation coin. The design was introduced in 1916 and replaced the Barber Coinage design. Charles E. Barber was the Chief Engraver of the United States Mint and had held the position since 1892 when he designed the Liberty bust for the dime, quarter, and half-dollar coins.

Under US federal law, the US Mint must use coin designs for at least 25 years before considering replacements. The Barber Coinage designs were considered outdated by the early 20th century and all three designs were replaced in 1916. While Barber was given the chance to submit designs, none of his were chosen as Adolph A. Weinman’s Walking Liberty design earned a spot on the half dollar and Weinman’s Winged Liberty design won the spot on the dime.

On the obverse of 90% Silver Walking Liberty Half Dollars is the left-profile figure of Liberty. She is depicted walking from right to left as she stretches her right hand out to the sun on the horizon of the design field. She is draped in the American flag and holds the branches of laurel and oak in her left hand.

We encourage Silver.com customers to call us with questions about silver for sale at 888-989-7223. You can also connect to us online using our live chat and email address features.