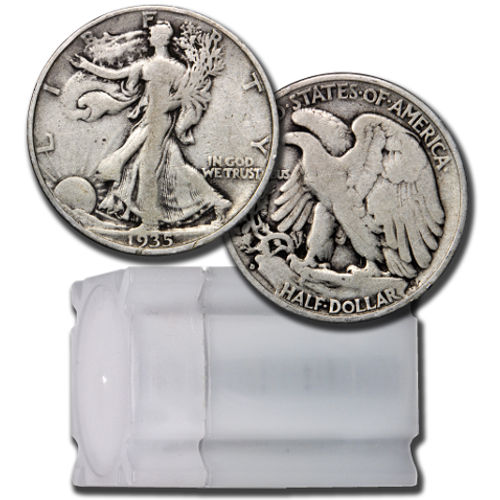 If investing in modern bullion silver coins seems overwhelming, or you are just starting out, there are plenty of good options out there to buy. American coins struck for circulation prior to 1964 actually feature 90% silver, making them a great option for early investors or collectors looking for hard-to-find designs. Today, 90% Silver Walking Liberty Half Dollars are available to you online at Silver.com.

The Walking Liberty Half Dollar coin was issued as the culmination of a decade-long project within the US government to modernize American coin designs in the early 20th century. The movement started in 1905 during the administration of President Theodore Roosevelt, with the double eagle, eagle, half eagle, and quarter eagle gold coins receiving an upgrade.

American nickels were revamped in 1913 as the first silver coins updated, with the half-dollar, quarter, and dime coming last in 1916. Adolph A. Weinman’s design of Walking Liberty and the American bald eagle were chosen for the half-dollar coin, and used from 1916 until 1947 when it was replaced by a portrait of Benjamin Franklin.

In this product listing, you’ll receive 90% Silver Walking Libert Half Dollars in a plastic bag of 20 coins, with a total face value of $10 (USD). Each of the individual coins in the listing are available in circulated condition, which indicates the coins show obvious signs of wear and tear or damage as a result of handling in circulation.

On the obverse of all Silver Walking Liberty Half Dollar Coins, you’ll find the image of Walking Liberty. The figure of Liberty is shown walking from right to left on the surface of the coin, with a cluster of branches in her right hand and the American flag draped over her shoulders.

The reverse of 90% Silver Walking Liberty Coins is the depiction of the American bald eagle. The national bird is featured ready to launch itself from the branches on a mountaintop cliff, with engravings of the nation of issue and the face value of the coin.

American silver coins issued before 1964 feature 90% silver content, with an alloy that combines 10% copper. After 1964, the United States began to issue silver coins with a cupro-nickel alloy instead.