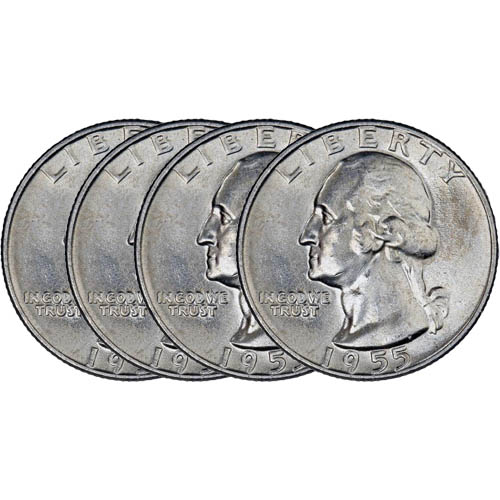 Second only to the Lincoln Penny, the Washington Quarter is one of the longest-running coin designs in American history. Though it has been modified and inscriptions have changed over time, the central depiction of President George Washington in left-profile relief remains the same as it was originally envisioned in 1932 by John Flanagan. Now, 90% Silver Washington Quarters are available to you for purchase online at Silver.com.

A Bicentennial Commission organized by Congress eventually recommended honoring the 200th anniversary of George Washington’s birth in 1732 with a one-year issue of his bust on the half-dollar coin, thus replacing the Walking Liberty design for just the 1932 issue. Instead, Congress decided to replace the US Quarter design permanently with the image of Washington.

This decision had been made a bit easier for Congress given the suspension of the US Quarter. Even though the Standing Liberty design was first released on the quarter in 1916, several redesigns of the imagery and the lack of its popularity with the American people lead to the suspension of the design in 1930. After not issuing fresh quarters in 1931, the US Mint was permitted to introduce the new Washington bust on the quarter in 1932.

The obverse of the 90% Silver Washington Quarter comes with a left-profile bust of the first President of the United States of America. Inscriptions of “Liberty” above his head and “In God We Trust” to the left of the design field are accompanied by a date mark at the bottom of the design field.

On the reverse side of 90% Silver Washington Quarters is a depiction of the American bald eagle. Here, the bald eagle is front-facing with its head looking to the left of the coin. Its talons clutch a sheaf of arrows wrapped in an olive branch.

In this product listing, Silver.com offers 90% Silver Washington Quarters in a bag of four coins in total for a combined face value of $1 (USD). Each coin has 90% silver content and a balance of 10% copper. The only dates that apply as 90% silver coins are those issued from 1932 to 1964. Please keep in mind you could receive four coins with all different date marks or all the same date marks.

Silver.com customer service is available to answer your questions at 888-989-7223. You can also chat with us live online or email us directly.