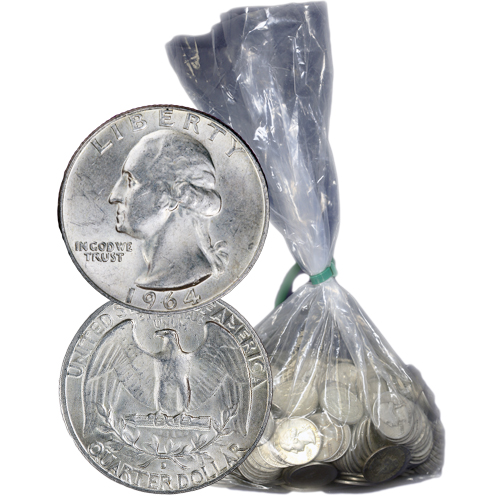 Any quantity available for $2.39 per oz over spot!

George Washington occupies a place in American history that no other man can claim. Not only is he consider the most influential Founding Father, leading the Continental Army against the British and serving as the first US President, he also set the standard of leaving office voluntarily after two terms. The 90% Silver Washington Quarter is available today on Silver.com.

In this product listing you’ll receive a US Quarter containing 90% silver content. Coins of this nature ceased to be struck by the United States Mint starting in 1965. The 1964 issue year was the last to feature 90% silver, 10% copper content in coinage following the switch to alloys in US coinage.

President George Washington was placed on the US Quarter starting in 1932 in honor of the bicentennial of his birth in 1732. Washington’s image on the quarter replaced the Standing Liberty image from Hermon Atkins MacNeil, which was created in 1916 to replace the quarter design from the Barber Coinage series.

Washington’s placement on the Quarter was a long time coming, with the administration of President Calvin Coolidge launching an effort as early as 1924 to place Washington on the quarter starting in 1932. The Standing Liberty quarter was halted in production following 1930, with no new quarters struck in 1931. Today, the longest running coin design in American history is the Washington Quarter.

On the obverse of the 90% Silver Washington Quarters you’ll find the left-profile portrait of President George Washington. His depiction was created in 1932 by John Flanagan and includes engravings of “Liberty,” the face value, nation of issue, and national motto of “In God We Trust.”

The reverse of the Silver Washington Quarters features the American bald eagle, which is depicted holding the olive branch of peace in one talon and a cluster of arrows in the other. This image has been replaced at times during the coin’s circulation, but is a requirement of federal law to appear on circulation coinage.

Your purchase of 90% Silver Washington Quarters arrives in a canvas bag containing 400 US Quarters. All quarters in this bag will contain year of issue marks from 1932 to 1964.

Silver.com customer service is available to talk on the phone at 888-989-7223, or you can connect with our associates on the web using our live web chat feature or via our email address.