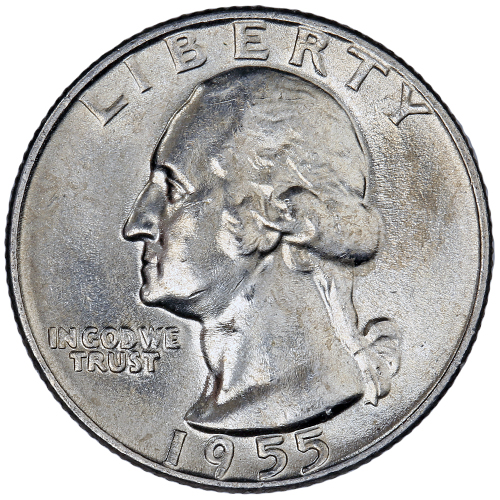 The longest running coin design in American history is the Washington Quarter. Introduced on the bicentennial of the birth of the first President of the United States, George Washington’s image has now featured on the US quarter 85 years. Today, 90% Silver Washington Quarters are available to purchase online at Silver.com.

While the US quarter-dollar coin still features the left-profile portrait of President George Washington, only the 1932 to 1964 issue quarters qualify as 90% Silver Washington Quarters. Prior to 1964, American coinage featured .900 silver content with 10% copper in the mixture.

The Coinage Act of 1965 changed the content of American currency to feature a pure copper center surrounded by two outer layers of cupronickel. As such, only the coins minted between the introduction in 1932 and the cessation of silver in 1965 qualify as 90% Silver Washington Quarters.

On the obverse of the 90% Silver Washington Quarters you’ll find the left-profile portrait of President George Washington. This image was adapted from a 1786 bust of then General Washington created by William Cousins.

The reverse of all Washington Quarters during this release period included the American bald eagle. It is depicted holding the traditional olive branch of peace in one talon and the arrows of war in the other.

90% Silver Washington Quarters replaced the popular Standing Liberty design from Hermon Atkins MacNeil. His design went down as one of the shortest lived quarter designs in American history, but made way for Washington’s portrait because 1932 marked the bicentennial of the first American president’s birthday. The administration of Calvin Coolidge began planning as early as 1924 for national celebrations of Washington’s birthday. The Washington design persists today as the oldest American coin design still in use continuously.

All Silver Washington Quarters were produced by the Denver, San Francisco, and Philadelphia Mint facilities of the United States Mint. These coins included mint marks only if struck at the Denver and San Francisco locations, as no “P” mint marks were used until after 1980 on the US quarter.

Please don’t hesitate to reach out to Silver.com with your questions. Our customer service team is available on the phone at 888-989-7223, online through our live web chat feature, and via our email address.