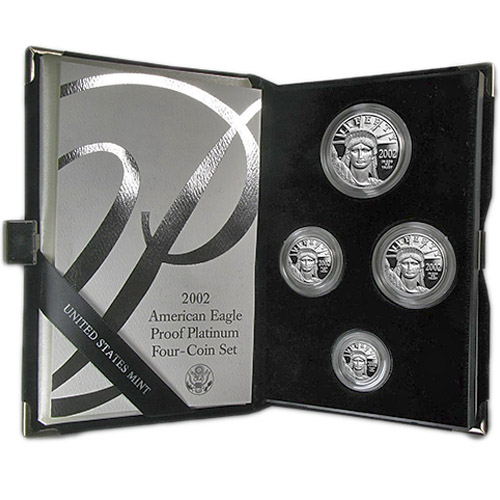 The official platinum coins of the United States are the Platinum American Eagles. Available since 1997 in bullion and proof, the striking of these coins has ebbed and flowed with demand and economic conditions. The coins were originally available with three fractional weights in addition to the 1 oz platinum coin. Right now, Platinum American Eagle Four-Coin Proof Sets are available to purchase online at Silver.com.

The US Mint offered the Proof Platinum Eagle in 1/10 oz, 1/4 oz, and 1/2 oz weights from 1997 to 2008. As such, the Platinum Eagle Four-Coin Proof Sets available here today can only feature date marks from that range. The coins each contain .9995 fine platinum and have a face value in USD representative of their weight compared to the 1 oz platinum coin with a $100 (USD) denomination.

On the obverse of all Platinum American Eagle coins in this four-coin proof set, you’ll find a depiction of the Statue of Liberty. Known as “Liberty looking into the future,” this design came from US Mint engraver John Mercanti in 1997 and is used on both the proof and bullion versions of the coin.

The reverse of the Proof Platinum American Eagle coins in this set offering something unique. The Platinum Eagle is the only bullion coins from the US Mint with new reverse designs each year. The collection has showcased various different design programs, including Vistas of Liberty from 1998 to 2002, the Foundations of Democracy from 2006 to 2008, and the Preamble to the United States Constitution from 2009 to 2014.