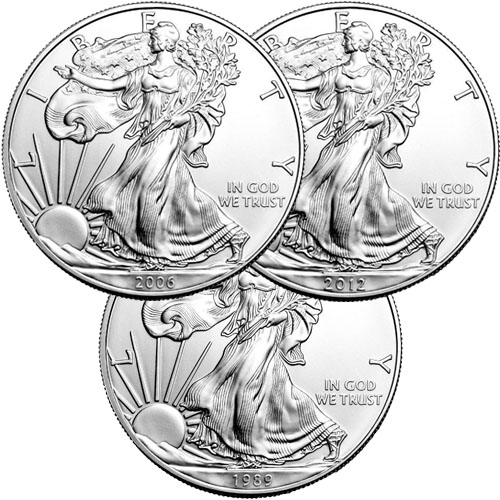 In this Silver.com listing you’ll find Silver American Eagle coins available for purchase from various years of mintage. The coins will feature a year of mintage between 1986 and 2021, but the specific year of mintage you receive depends upon availability at the time your order is processed and fulfilled for shipping. We cannot guarantee you will receive varying date marks if you purchase multiples of this coin. Please also note that, although these coins are uncirculated and in good shape, toning and other minor flaws are possible. Such flaws are acceptable in uncirculated coins by the standards of the PCGS and NGC. Please keep in mind that it is possible to receive the Type 1 or Type 2 design with 2021-dated coins.

Introduced in 1986, the Silver American Eagle has seen various ups and downs in its popularity over the course of decades of availability. The coins feature .999 fine silver content and contain exactly One Troy ounce of the precious metal, both of which are guaranteed by the United States government and established by the Liberty Coin Act signed by Congress.

When the Silver American Eagle was introduced, it was available in a bullion and proof version. The bullion coins were struck by the San Francisco Mint from 1986 until 1998, followed by two years at the Philadelphia Mint. Since 2001, the Silver Eagle bullion coin has been produced at the West Point Mint.

Adolph A. Weinman’s Walking Liberty design from 1916 has been the face of the Silver American Eagle’s obverse side since its introduction. Walking Liberty depicts the image of Liberty walking toward the setting sun, indicative of the nation’s desire to move toward a brighter future.

The reverse of the coin features a design from then-US Mint Chief Engraver John Mercanti. His heraldic eagle design is a modern take on one of the nation’s oldest designs. Mercanti was Chief Engraver at the US Mint from 1986 to 2010, and his other creations include the obverse design of the Platinum American Eagle coin. Alternatively, 2021 Type 2 coins have a new design from Emily Damstra showing an American bald eagle in flight as it clutches an oak branch.

Please feel free to reach out to Silver.com with any questions. You can contact us at 888-989-7223, online using our live web chat feature, or via our email address.