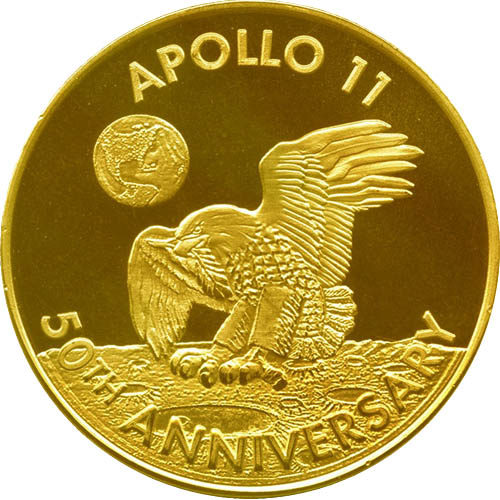 In July 1969, the American astronauts of the Apollo 11 mission captivated the world by landing on the surface of the Moon. This marked the first time in human history that beings from Earth reached into the cosmos to set foot on another celestial body. Not only did the humans land on another celestial body, but those same individuals also returned home safely to Earth. Right now, Apollo 11 50th Anniversary Rounds are available to purchase online at Silver.com.

Each Apollo 11 50th Anniversary Round available to purchase here at Silver.com comes with protective packaging and a display. The round is set within a plastic capsule and comes with a small stand for upright display of the round in its capsule. There is also a Certificate of Authenticity available with this piece. Each round is clad in a thin layer of 24-karat gold.

The designs you’ll find on the obverse and reverse of these Apollo 11 50th Anniversary Rounds were not chosen at random. These images were first created in the summer of 1969 by the Robbins Company of Massachusetts. This company made a number of medallions for astronauts to take into space on various Apollo missions starting in 1968. Neil Armstrong carried a sterling silver medallion with these same designs on it into space with him on the Apollo 11 mission.

The obverse side of Apollo 11 50th Anniversary Rounds is a replication of that original Robbins Company medallion. The design captures the mission patch of the Apollo 11 astronauts. In the design, an American bald eagle is featured landing on the surface of the Moon with an olive branch in its talons and planet Earth in the distant background.

On the reverse field of the Apollo 11 50th Anniversary Round are several inscriptions commemorating the Apollo 11 mission. Along the top rim of the design field are the last names of the three men in the crew: Armstrong, Collins, Aldrin. The center of the design field includes the launch date of Apollo 11, the date of its landing on the lunar surface, and the date of its splashdown back on Earth.