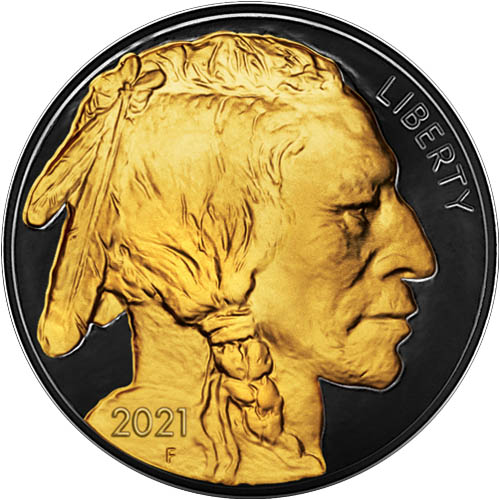 One of the most popular coin designs in American history was the Buffalo Nickel. Alternatively referred to as the Indian Head Nickel, this coin design was struck on the US five-cent piece from 1913 to 1938. More recently, it was revived on the obverse and reverse designs of the Gold American Buffalo, a bullion coin that is the first-ever 24-karat gold coin from the United States. Now, Black Ruthenium Indian Head Tribute Coins are available to purchase online at Silver.com.

Indian Head Nickels were designed by James Early Fraser in 1912 and approved in 1913. Fraser’s design was approved by the administration of President William Howard Taft and authorized for use on the US nickel. The design was a first for major American circulations in its use of indigenous design themes.

Fraser’s imagery for the Buffalo Nickel, as it was also known, was produced on the five-cent piece through 1938. The coins were exceptionally popular in circulation and proved popular as a collectible item long after production of the design ceased. In 2006, it was revived in its totality for the obverse and reverse of the Gold American Buffalo.

A stoic indigenous figure features on the obverse side of all Black Ruthenium Indian Head Tribute Coins. The coins come with an image of an indigenous figure in right-profile relief with a stoic glance on his face. His hair is braided and feathers are woven into the back of his head. The inscriptions on this face of the tribute coin are the same as the modern-day Gold Buffalo.

The American bison is depicted in its powerful form on the reverse field of Black Ruthenium Indian Head Tribute Coins. Fraser took inspiration for his design from Black Diamond, a resident bison at the Central Park Zoo in New York City in the early 20th century. The image shows the bison in left-profile relief on a small mound of dirt.

These Black Ruthenium Indian Head Tribute Coins are available to you with individual protective plastic capsules. The tribute coins come with a small, round display stand that enables you to display the coins upright at any time. Each tribute coin has a thin layer of both 24-karat gold and ruthenium in its design, with a Certificate of Authenticity included with purchase.