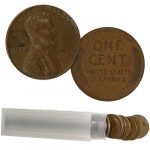 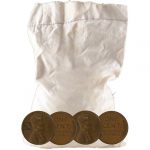 US pennies are a great way to invest in copper bullion. While the variety of newly-produced copper products typically come in the form of bars and rounds, it is possible to find copper coins available. In the case of the latter though, the most common source is formerly circulating copper pennies from the United States Mint. Among the most common available that still feature 95% copper content is the Wheat Penny. Learn about this impressive copper coin now at Silver.com.

About the Wheat Penny

The Wheat Penny is a name commonly associated with the first design series in the Lincoln Cent range. The effigy of President Abraham Lincoln arrived on the US penny in 1909 and the obverse image of President Lincoln remains on the penny to this day. However, Wheat Pennies are those that feature a reverse design element with wheat stalks as struck on the penny from 1909 to 1958. Victor David Brennan was the original designer of both the obverse and reverse images in the Wheat Penny series.

Brennan was approached directly by President Theodore Roosevelt to help launch a campaign to revitalize the appearance of American coinage in the early 20th century. President Roosevelt saw the designs of America’s coins as outdated and at odds with the growing international prominence of the country. Brennan’s design of Abraham Lincoln was controversial at first as it was the first time a US President featured on a widely circulating coin. Dating back to the administration of President George Washington, Americans viewed it too monarchical to place a leader’s effigy on coins. Despite some resistance, Brennan’s design was approved.

The obverse of Wheat Pennies features the right-profile portrait of Abraham Lincoln based on a photograph of the nation’s 16th President taken in the studio of Mathew Brady in 1864. The bust depicts Lincoln seated and includes inscriptions of “In God We Trust” above Lincoln’s head, “Liberty” behind his neck, and the date mark with a mint mark (for certain issues) just in front of his chest.

On the reverse of Wheat Pennies, you’ll find simple engravings. The face value of “One Cent” and the name “United States of America” feature in the center of the design field with one wheat stalk on either side curved to frame the design field. “E Pluribus Unum” is featured up above the design field.

The reverse side of the coins initially featured the “VDB” initials of Brennan along the bottom rocker of the design field in 1909, but that would prove to be a one-year phenomenon. The American public was not found of the prominence of Brennan’s initials in the design field. His initials were removed in 1910 and did not reappear until 1918, at which point the initials were located along the bottom rocker of the obverse where Lincoln’s shoulders are cut off by the edge of the coin.

Wheat Pennies were struck at relatively steady levels through each year of availability over the course of the five decades the coins were produced by the United States Mint. The rarest coin, by modern availability and initial striking, is the 1909-S VDB Wheat Penny. The US Mint only released 484,000 coins in the first year. The lowest period of production for the pennies came during World War I and again in the early 1920s as demand for pennies dropped. Generally speaking, the most common Wheat Pennies available today are those that were produced in the 1940s and 1950s because they were the most recently issued by the mint.

There is one particularly unique offering in the Wheat Pennies series. Pennies have, for most of American history, been produced with copper, tin, and zinc. During World War II, America’s industrial base ramped up production of guns, tanks, planes, ships, and bullets for its forces to use in fighting the Axis Powers. Copper and tin were vital to the war effort and by 1943 Congress had authorized the US Mint’s alteration of the copper and tin content of pennies. For 1943 only, the US Mint struck Wheat Pennies with a majority steel content and a zinc plating. By 1944, the US Mint returned to the use of copper, zinc, and tin in pennies.

Packaging of Wheat Pennies at Silver.com

When you buy copper from Silver.com, you will find copper Wheat Pennies available largely as a bulk purchase option. The coins are available in bulk canvas bags, rolls housed inside of a tube, or in 1 lb and 5 lb plastic bags. The coins are not available with one specific date per bag, but rather with a mixture of common dates inside of the bag. The benefit of purchasing Wheat Pennies is that they are the only remaining pennies widely available with 95% copper content.

History of Copper Pennies in the US

The United States issued pennies during the first years of production at the new United States Mint. The mint was founded in 1792, and with pennies debuting in 1793, the one-cent coin is one of the nation’s oldest coins. The penny as a unit of currency is a holdover from the British Colonial Era in the US and North America. Britain issued a penny with the plural known as pence, while the new Americans offered them as pennies.

In 1982, the United States Mint removed the majority copper content of pennies. The modern penny now weighs 2.5 grams and has 97.5% zinc and 2.5% copper. Designs used over the course of time include:

Buy Your Wheat Pennies at Silver.com

If you’re looking to buy copper as part of your investment in precious metals, please don’t hesitate to reach out to Silver.com with questions. You can call us on the phone at 888-989-7223, chat with us live online, or simply send us an email. You can also use our website to track changes in copper prices before you buy!