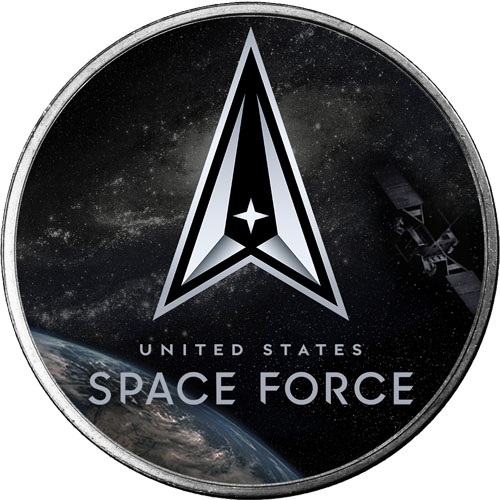 Through the first 140 years of American history, silver US dollar coins were a regular issue from the United States Mint. The last silver US dollar issued into circulation was the Silver Peace Dollar in 1935. In 1971, the Eisenhower Dollar debuted and was released until 1978 by the mint. These coins never made it into circulation in large volumes as previous issues and were typically held as collector items. Existing versions of the Eisenhower Dollars in the 21st century are all collectible legal tender coins. In this release, you can get a unique version of this legal tender coin. Now, Eisenhower Dollar United States Space Force Legal Tender Coins are available to you for purchase online at Silver.com.

The 1971 release of the Eisenhower Dollar was the first issue of a US dollar coin since 1935, but the Eisenhower Series was short-lived at the mint. It was only released from 1971 to 1978. Its most distinctive release during this period was the Bicentennial Dollar, a coin with a new reverse design element and a dual date mark that the US Mint issued in 1975 and 1976. Legal tender US coins from that Bicentennial release are available in this listing with a unique, collectible obverse.

Eisenhower Dollar United States Space Force Legal Tender Coins are available with a colorized obverse visual field. This design honors the founding of the United States Space Force. Authorized in December 2019 when President Donald J. Trump signed the 2020 Defense Authorization Act, the US Space Force is the 6th branch of the US Military and joins the Department of the Air Force as a sister branch to the US Air Force.

The obverse of Eisenhower Dollar US Space Force Legal Tender Coins comes with a colorized depiction of the US Space Force logo. The new branch’s logo is a delta-like shape with a single star in its design. The US Space Force logo is set at the center of the design element with brilliant colorization in the background that is dominated by the blackness of deep space and the bright shine of stars throughout the galaxy. The rich hues of life on planet Earth are found in the lower-left field where the planet is shown.

On the reverse side of Eisenhower Dollar United States Space Force Coins is the Bicentennial Eisenhower Dollar design. In 1975 and 1976, the US Mint produced the Eisenhower Dollars with a modified reverse to celebrate the nation’s 200th birthday. This design included a vision of the Moon in the background field with the Liberty Bell in the foreground.

These Eisenhower Dollar United States Space Force Legal Tender Coins are available to you for purchase with a protective capsule and small display that allows you to stand the coin and capsule upright. The coins come with a Certificate of Authenticity as well.

Silver.com customer service is available at 888-989-7223. You can also connect with us online through our live chat and email address features.