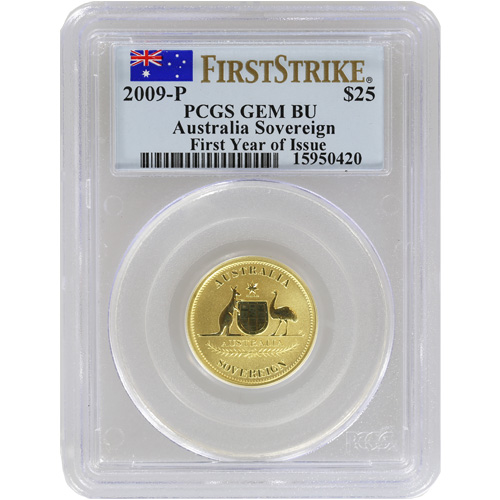 The first Australian Sovereigns issued on the Australian continent were actually struck by the Sydney Mint, the first branch of the Royal Mint on the continent, in 1851. These coins were issued with the British effigy of Queen Victoria on the obverse, but the coins were given a distinct reverse design. Official Gold Australian Sovereigns were first issued in 1871 using the exact designs of the Gold British Sovereign of the era.

The obverse side of Gold Australian Sovereign Coins features an effigy of the reigning monarch of England as that individual’s reign aligns with the date mark. Queen Victoria’s effigy appears on coins dated 1871-1901, King Edward VII on coins dated 1902-1910, and King George V on coins dated 1911-1931.

On the reverse field of Gold Australian Sovereigns is one of two depictions. Coins dated 1888-1931 have Benedetto Pistrucci’s image of St. George slaying the dragon. The initial coins, dated 1871-1887, have the Royal Arms with a heraldic wreath.

These Gold Australian Sovereigns are available with plastic flips. These coins come in varied conditions and likely show common signs of wear and tear such as scuffs, scratches, hairlines, and contact marks. All coins are chosen at random and we cannot promise a particular date, design, or condition. If you buy multiples, please keep in mind you may get coins with matching dates, designs, and conditions.

Silver.com customer service can answer your questions about gold for sale at 888-989-7223. You can also chat with us online or send us an email.