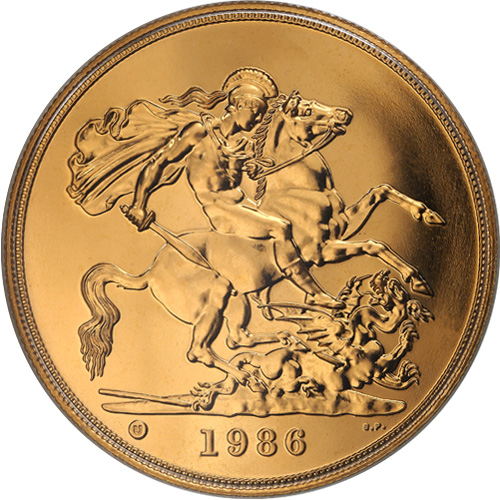 The Royal Mint of the United Kingdom has a rich history of striking coins that dates back more than one thousand years. Though most modern investors are familiar with programs such as the Gold Britannia or the new Queen’s Beast collection, the Gold British Sovereign has been the nation’s preeminent coin for centuries. Right now, you can purchase the 5 Pound Gold British Sovereign coin online at Silver.com.

Each of the 5 Pound Gold British Sovereign Coins in this product listing come from a varied year of issue. Silver.com cannot guarantee the year of issue marked on the coin you receive, as availability is determined by the coins in stock in our warehouse at the time your order is processed for shipping.

Gold British Sovereign coins date back beyond the 1817 first issue of the modern sovereign gold coin. King Henry VII first issued a gold coin as the sovereign coin of the Kingdom of England in 1489, and it was given a nominal face value of One Pound Sterling (20 shillings).

Throughout British history these coins have been struck with the image or portrait of the reigning monarch on the obverse face. For example, from 1583 to 1600, the image of Queen Elizabeth I appeared on the coins. The Great Recoinage of 1816 brought the gold sovereign coin back into circulation in the United Kingdom.

On the obverse remains the image with each release year of the reigning monarch. In the case of 5 Pound Gold British Sovereigns, Queen Elizabeth II features on the coins as they’ve been produced predominantly during her reign. You’ll notice either the third-generation portrait of Her Majesty from Maklouf, or the fourth-generation design from Ian Rank-Broadley on coins dated 1998 or later.

The reverse of all British Sovereign gold bullion coins features the image of St. George slaying the dragon, and is the same design from 1817 when Benedetto Pistrucci designed it for the Royal Mint. Pistrucci was an Italian gem-engraver, medalist, and coin engraver who became Chief medalist at the Royal Mint in 1817.

If you have any questions, please feel free to ask. Silver.com customer service is available at 888-989-7223, online using our live web chat, and via our email address.