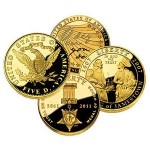 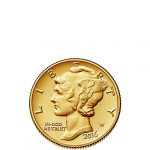 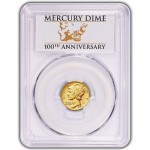 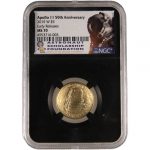 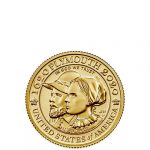 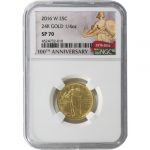 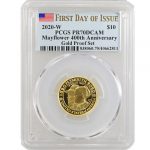 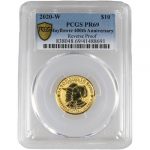 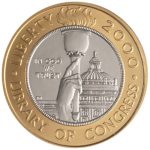 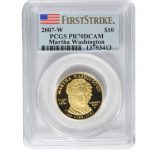 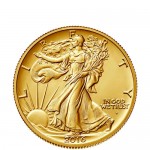 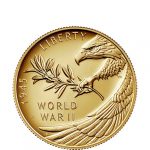 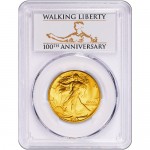 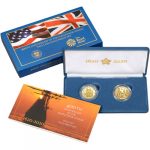 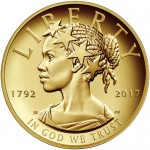 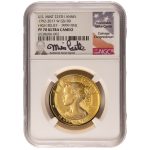 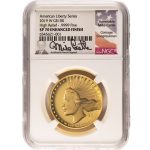 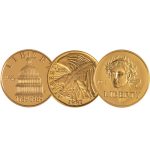 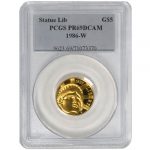 The United States Mint has a lot to celebrate in 2016. While most modern investors and collectors are focused on the 30th anniversary of the nation’s official gold and silver bullion coins, the American Eagle series, the US Mint is also rolling out its third offering of 24-karat gold coins. Following the Gold American Buffalo and 2015’s High Relief Liberty gold coins, the US Mint released three 24-karat gold coins honoring the centennial of some of the country’s best designs ever.

In the 2016 Gold American Centennial Coin series from the US Mint, investors and collectors will find three different coins to choose from in total. The series commemorates the importance of 1916 in US history, as three new designs rolled out on American currency that became some of the most popular over the course of their circulation life.

Included in the 2016 Gold American Centennial Coin series are revitalized images of dime, quarter, and half-dollar designs from Adolph A. Weinman and Hermon Atkins MacNeil. Weinman’s designs graced the dime and half-dollar coins celebrated in this series, while MacNeil’s featured on the quarter. Learn all about these Gold Centennial Coins right now on Silver.com.

The Mercury Dime, known officially to the US Mint as the Winged Liberty Dime, was created in 1916 by Adolph A. Weinman. His design replaced that of US Mint Chief Engraver Charles E. Barber, whose dime design had been in use since 1892. Weinman created an image of a young Liberty in left-profile relief wearing a winged Phrygian cap, with Elsie Stevens rumored to be the model who inspired his design. Stevens was the wife of lawyer and poet Wallace Stevens.

Weinman’s Winged Liberty design eventually became known colloquially as the Mercury Dime because his depiction of a young Liberty reminded many of the Roman messenger god Mercury, who wore a similar winged cap. The Mercury Dime was originally in circulation in the United States from 1916 until 1945.

The Mercury Dime design from Weinman was chosen by the Treasury Department, in which the United States Mint is included governmentally, without the authorization of Congress. The US Mint was under the impression that coin designs had to be changed, so it opened a contest to three sculptors. Included in the contest was current Chief Engraver and designer of the current dime, Charles E. Barber. The Mint eventually chose Weinman’s design for the dime. His Mercury Dime design would itself be replaced in 1945 in favor of a portrait of the recently deceased President Franklin D. Roosevelt, who was placed on the dime following the success and stature of his March of Dimes initiative while in office.

Weinman’s Mercury Dime featured the Winged Liberty design on the obverse along with engravings of “Liberty,” the year of issue, and “In God We Trust.” The reverse featured a Roman fasces, a symbol of unity and strength, wrapped in an olive branch. Engravings on this face included “United States of America,” “E Pluribus Unum,” and the coin’s face value. These images are all accurately recreated on the 2016 Gold American Mercury Dime.

The 2016 Gold American Mercury Dime Coin from the US Mint features 1/10 troy ounce of .9999 fine gold, and features its original face value of $.10 (USD). The coins are backed by the federal government and were given the 1/10 ounce weight to accurately reflect the size and dimensions of the original circulation Mercury Dime.

Only two additions were made to Weinman’s original designs. On the obverse of the coin, his “AW” initials were added to the design. The reverse features the metal content, purity, and weight of the coin along with all the original engravings and design features.

The Gold American Mercury Dime is the first release from the US Mint in this planned three-coin series. It has a limited mintage of 125,000 coins, with a household ordering limit of 10. Each coin ships in a hardwood display box with a Certificate of Authenticity from the United States Mint.

Another of the iconic coin designs from 1916 was the Standing Liberty Quarter from Hermon Atkins MacNeil. His design also replaced a Barber design from 1892, but unlike Weinman’s designs for the dime and half dollar, the Standing Liberty quarter would be in circulation for a much shorter period of time. More on that in a little bit.

MacNeil’s Standing Liberty Quarter featured an obverse design that depicted a full-length Liberty standing between the gap in a wall, holding a shield in her left hand and an olive branch in her left. The symbolism indicated that the goddess Liberty was on guard against attacks, but as always, that the nation preferred peace.

In his original design, MacNeil had included dolphins in the background to represent the seas and depicted Liberty bare-chested. The US Mint made several modifications to this original design, not the least of which was giving Liberty a chain-mail chest plate to cover her figure. The dolphins were also removed from the design.

The reverse face of the original featured an American bald eagle in flight, with its wings spread wide and the figure framed on either side by a total of 13 stars to represent the original colonies. Many criticized the early reverse design from MacNeil as little more than a version of Christian Gobrecht’s reverse design from 1836 dollar. The only difference between the two was the direction of the eagle’s flight, which was left to right on the Standing Liberty quarter as opposed to right to left on the Gobrecht dollar.

Engravings on both sides of the coin included “Liberty,” “In God We Trust,” and the year of issue on the obverse. The reverse included “United States of America,” “E Pluribus Unum,” and the coin’s face value.

MacNeil’s Standing Liberty Quarter was in circulation from 1916 until 1930. The United States Mint ceased production of his design, and all new quarters, in 1931, and debuted a new design in 1932. That new design was John Flanagan’s left-profile portrait of President George Washington, which still graces the American circulation quarter today.

For the 2016 Gold American Standing Liberty Quarter, the United States Mint will strike a maximum of 125,000 coins with ¼ troy ounce of 24-karat gold. Each one ships in a hardwood display box featuring a black-matte finish, with a Certificate of Authenticity included. The household limit of 10 per order applies to this coin as well. The use of ¼ oz.blanks in the striking gives the commemorative Gold American Centennial coin a size representative of the actual quarter.

Aside from Augustus Saint-Gaudens’ depiction of Liberty for the $20 Gold Double Eagle (and the $10 Eagle of the day), there is no coin design in American history more famous than Adolph A. Weinman’s Walking Liberty. The final of the iconic designs introduced in 1916, Weinman’s Walking Liberty was the most historic design from the US Mint that almost never was to begin with.

The same competition hosted by the Commission of Fine Arts that resulted in Weinman’s Mercury Dime design winning out, also saw the Walking Liberty design earn a spot on the half dollar in place of Barber’s half-dollar design. However, Weinman’s Walking Liberty image was almost shelved at the last minute because the US Mint was having trouble striking it onto coins. In fact, Treasury Secretary William G. McAdoo almost asked Barber (still the Chief Engraver in 1916) to create his own new design. The US Mint eventually moved forward with Walking Liberty, though it never struck very well onto coins throughout its circulation period.

Walking Liberty featured the full-length figure of Liberty draped in the American flag walking toward the setting sun. The imagery represents the nation’s constant march toward a brighter future, while the laurel and oak branches she carries in her left hand are indicative of the nation’s civic and military achievements.

His reverse design for the original Walking Liberty Half Dollar features an American bald eagle preparing for flight from its perch on a branch atop a cliff. It depicts the nation at rest, but ready to fight if need be in defense of its freedom. Engravings on the obverse include “Liberty,” “In God We Trust,” and the year of issue. The reverse features “United States of America,” “E Pluribus Unum,” and the coin’s face value.

The Walking Liberty Half Dollar was in circulation from 1916 until 1947, when it was replaced with a design of Founding Father Benjamin Franklin. US Mint Director Nellie Tayloe Ross pushed for a design of Franklin, which eventually came from Engraver Sinnock, because he was an admirer of Franklin. Today, Walking Liberty lives on as the face of the American Silver Eagle, the nation’s official silver coin and the most popular silver product in the world.

The 2016 Gold American Walking Liberty Half Dollar is the final release in the Gold American Centennial Series. These coins have the same mintage cap at 125,000 in total, and feature ½ troy ounce of 24-karat gold. Again, each coin ships in a black-matte, hardwood display box with a Certificate of Authenticity. The household limit of 10 per order applies to these coins as well.

Brief History of Change in the 20th Century

The United States Mint underwent a massive program of change in the early 20th century, which was initiated in 1905 by President Theodore Roosevelt. The president wanted to update the nation’s coin designs to modernize and beautify the coins, but also to put American coinage on the map as a more representative item of the nation’s growing influence. In this way, the wholesale change of American coin design was similar to his Great White Fleet, the modern naval fleet of the United States Navy that circumnavigated the globe in a display of growing American power.

Augustus Saint-Gaudens’ 1907 design of Liberty, featured on the $20 Gold Double Eagle and $10 Gold Eagle, launched the movement. Artists such as James Earle Fraser, whose Buffalo Nickel design from 1913 is also immensely popular, also contributed to the movement. 1916 was particularly influential because Weinman’s two designs and MacNeil’s quarter represented the last circulation currency to undergo a transformation during this reformative period.

Paper checks have a higher maximum threshold and include a 4% discount in price compared to credit/debit card purchases, but also have a longer processing time at four to six business days on average. Bank wire and PayPal fund transfers offer our highest maximums, as well as instantaneous processing. As a result, your purchase is released to our shipping queue for faster fulfillment.

Silver.com uses a tiered shipping payment schedule. There are varying flat rate fees for all purchase $2,999 and below. However, spend $3,000 or more and you’ll enjoy free standard shipping and insurance for your Gold Centennial Coins. All packages ship in discreet boxes and are handled by either the United States Postal Service or UPS. Should your package become lost or get stolen during shipping, Silver.com will work with the carrier to retrieve your shipment. If that is not possible, we’ll initiate an insurance claim on your behalf to recover your funds.

If you have any questions about the release of these exciting Gold Centennial Coins, please don’t hesitate to ask Silver.com. Our associates are available on the phone at 888-989-7223, online using our live web chat feature, or via our email address.