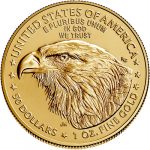 The Gold American Eagle coin program is one of the most popular in the global precious metals marketplace. More than one million of these coins are struck each year by the United States Mint, with demand among numismatics providing guidance for the Mint as it goes through the production cycle each year.

Gold American Eagles were introduced in the same year as the Silver Eagle program from the Treasury Department and US Mint. The Gold Eagle program was authorized through passage of a separate bill, the Gold Bullion Coin Act of 1985. Following approval by Congress, the coins went into production for the first time with 1986-minted coins the first available to the public for purchase.

Each year, the US Mint produces Gold American Eagle coins based upon demand for the coin in the marketplace. Mintage has fluctuated over time based upon demand for gold bullion coins. The coins were struck in high levels during the first two years of production in 1986 and 1987, but decreased rapidly over the following decade.

In the intervening years, there have been two spikes in demand for the coins. The first spike came with the approach of the 21st century and peaked with unprecedented mintage levels between 1997 and 1999. A second peak in mintage occurred during the depths of the Great Recession between 2008 and 2010. Today, mintage levels remain low in comparison to the Silver American Eagle Program.

Each coin in the series is struck using a metal alloy that consist of 22-karat gold, or .9167 fine gold. The metal alloy also consists of 3% silver and 5.33% copper, and is used to increase the longevity of the coin by making it more wear-resistant than coins with a higher gold content. The Gold American Eagle is the first US coin struck using .9167 gold since 1837 when the gold content was lowered to .900 in all US gold coins.

The Gold American Eagle coin resurrected what was perhaps the most popular coin design of all time in American minting. Augustus Saint-Gaudens’ $20 Gold Double Eagle design featured an image of Lady Liberty that is widely considered the finest creation ever used on an American coin. In the image, Lady Liberty is depicted walking forward from the rising sun. The Capitol Building in Washington DC is visible at her feet, and she is featured holding a torch in one hand and an olive branch in the other. First created in 1907, the design was reinvented and used on the obverse of Gold American Eagle coins.

On the reverse side is an image of a family of bald eagles in its nest. In the depiction, a male eagle returns to the nest with an olive branch in its talons as the female stands guard over the hatchlings. Sculptor Miley Busiek was commissioned to design this image specifically for the Gold American Eagle coin series.

The term “brilliant uncirculated” is used by grading services to identify Gold American Eagle coins with no trace of wear on the surface. It is possible that the coin may show contact marks, spotted surfaces, or breaks in the coin’s luster, but generally speaking, a brilliant uncirculated coin has no visible signs of wear and tear as a result of excessive handling.

There are various grading services that operate around the globe, but two of the largest are the Numismatic Guaranty Corporation and the Professional Coin Grading Service. These two services use brilliant uncirculated (or related terminology) to identify Gold American Eagle coins with no wear. Additionally, these two services are often viewed as the most stringent when it comes to grading coins, adding value to the Brilliant Uncirculated Gold American Eagles that pass their tests.

Generally speaking, it is difficult to find Brilliant Uncirculated Gold American Eagle coins from years when mintage levels were low and/or the specific coins with lower mintages. For example, 1996 and 2007 Gold American Eagles are difficult to find because mintage levels were so low. A total of roughly 650,000 Gold Eagles were struck in 1996, while only 380,000 were produced in 2007.

In any given year of minting, the ½ oz and ¼ oz coins have the lowest mintage, making it more difficult to find these coins in brilliant uncirculated condition, as well.

When you purchase a Brilliant Uncirculated Gold American Eagle from Silver.com, you get fast, reliable shipping, the peace of mind that your package will arrive safely. All orders from Silver.com are packaged in unmarked boxes to avoid giving away the identity of the contents.

If you have any questions about Brilliant Uncirculated Coins or any gold coins, a Silver.com associate is waiting to answer those inquiries. You can contact our associates on the phone at 888-989-7223, or connect with us online through our website’s live chat, as well as email.