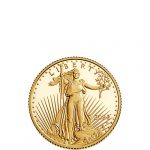 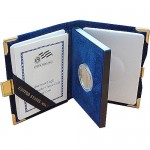 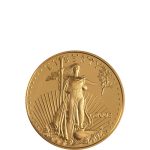 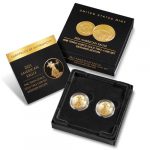 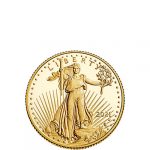 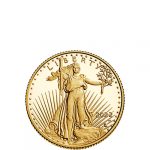 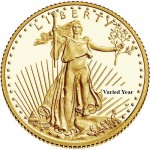 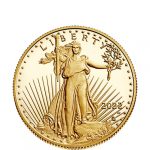 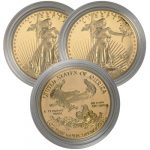 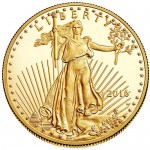 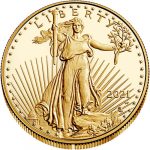 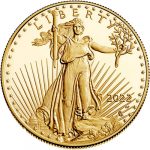 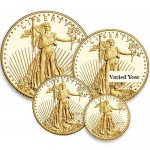 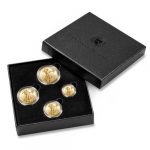 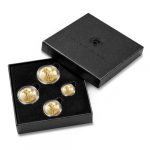 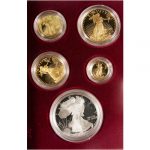 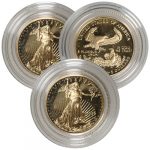 When it comes to iconic American images, it’s hard to beat Lady Liberty and the bald eagle. A gift from the people of France, the Statue of Liberty has stood guard in New York Harbor since the 1880s, providing a guiding light for all those seeking freedom and a fresh start. A symbol of power, majesty, and longevity, the Founding Fathers chose the bald eagle as the national emblem in 1792. Today, these symbols are used on every Proof Gold American Eagle produced by the United States Mint.

The United States Congress authorized production of Gold American Eagle coins in 1985 with passage of the Gold Bullion Coin Act. The bill allowed the Treasury Department and United States Mint to strike Proof Gold American Eagle coins to serve as the official gold coin of the nation. With introduction of this coin, a major shift in American coinage occurred.

In 1834, the United States produced the last of its Crown gold alloy coins, or coins with a gold content of .9167 (22 karat). Between 1837 and 1985, all US gold coins were minted using .900 gold. Each Proof Gold American Eagle coin is struck using .9167 gold, along with 3% silver and 5.33% copper to boost the coin’s wear-resistant features. By law, all coins produced in the series must use gold that is sourced from within the US.

The first year of production for Proof Gold American Eagle coins came in 1986. Although four weights are now produced, the 1 oz coin was the only weight in production during the first year of minting. The three fractional-weight coins were added in the next two years. First the ½ oz coin was introduced in 1987, and then the ¼ oz and 1/10 oz coins in 1988.

Unlike the bullion coin program, which has seen spikes in demand followed by low periods of production, the Proof Gold American Eagle has experienced relatively consistent production over the last 29 years. By 1989, the proof coin program has settled into a production range that averaged anywhere between 150,000 and 230,000 coins. For much of the coin’s history, the 1/10 oz was the most popular single weight in the series, though recent years have seen a reversal in that trend as the 1 oz coin regains its spot as the highest mintage in the series.

Proof is not a term used to describe a coin’s condition, but rather the production process that results in its brilliant finish. A Proof Gold American Eagle is a coin that includes a strong, frosted finish on the design feature, with a deeply mirrored, clear background field. This effect is created by striking each coin multiple times with the die during production.

When Augustus Saint-Gaudens first developed his Lady Liberty design in 1907, the United States Mint did not possess the technology to accurately capture the full beauty of his imagery. Saint-Gaudens’s was commissioned by President Theodore Roosevelt to create an image that would elevate the status of American gold coins. Unfortunately, Saint-Gaudens died before his final design was approved and put into production.

On the obverse side of Proof Gold American Eagles is the image of Lady Liberty. Featured in full-length figure, she is depicted striding toward the viewer with the rays of the rising sun shining from behind her back. Around her image are 50 stars, representing each of the states in America. The reverse side features Miley Busiek’s depiction of a family of a nesting bald eagles. In her design, a powerful male eagle returns to the nest where a female keeps a vigilant watch over the hatchlings.

Generally speaking, the ½ oz and ¼ oz fractional coins are the toughest to find because their mintage levels are the lowest in the series. Coins from recent production years, such as 2012 and 2013, are also difficult to find because total mintage was extremely low (under 100,000 total). There were no proof coins struck by the United States Mint in 2009.

Shopping with Silver.com is a breeze, because we put your comfort and security at the top of our priority list. More than 90% of Silver.com packages are shipped the same day or on the next business day after cleared payment in discreet boxes to ensure no one can identify the contents. Every package includes full insurance to protect your investment against loss or damage during shipping.

If you have any questions about Silver.com products or services, one of our associates is standing by to answer your inquiries. You can contact a Silver.com team member at 888-989-7223, or connect with us online using our live web chat and email services.