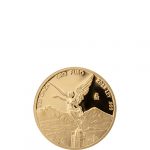 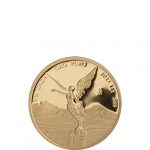 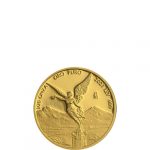 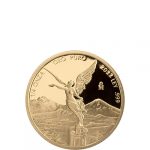 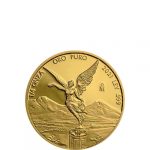 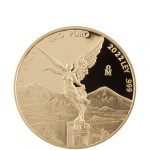 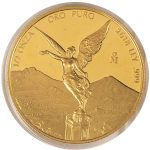 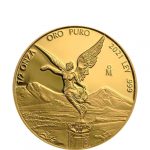 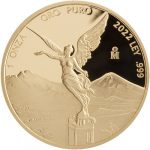 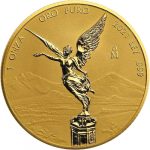 The Mexican Libertad may have been introduced in 1982, but its history dates back to 1921 and the nation’s celebration of its independence from Spain. In 1821, the people of Mexico started an armed revolt against colonial rulers from Spain. After an eight-year war, the Mexican Army emerged victorious. A century later, the nation of Mexico marked 100 years of independence with celebrations, construction of a statue of Winged Victory in Mexico City, and the striking of a gold Centenario coin.

On the obverse side of the original Centenario coin, the central design feature was that of Winged Victory. Also known as the Angel of Independence, she represented the successful struggle of the Mexican people to free themselves from Spanish rule. In her right hand, she holds aloft a wreath crown. In her left hand, the broken chains of servitude. In the background, the volcanic peaks of Popocatepetl and Iztaccihuatl are visible.

Engravings on this side of the coin include the face value of 50 Pesos, as well as the centennial mark of 1821-1921, and the coin’s weight, purity, and metal content. The reverse features the image of the Mexican coat of arms, which depicts a golden eagle in battle with a serpent atop a cactus perch.

These coins were produced by the Mexican Mint from 1921 to 1931, with production resuming from 1943 to 1947. Beginning in 1949, the mint struck reproduction versions with a mint mark of 1947. These coins remained in production through 1972. Although Centenario coins were issued a face value, they were not considered legal tender and not available for use as official currency.

Rebirth of the Centenario Design

When the Mexican Mint unveiled the nation’s new, official gold bullion coin in 1982, the Centenario design was refined and repurposed for use on the Mexican Libertad. Originally available in silver and gold, the coins featured an altered version of the original Centenario design with the images flipped to different sides of the coin.

On the reverse side, the image of Winged Victory remained the same, as did the background depiction of the twin volcanic peaks named after a pair of ancient Aztec lovers. However, engravings had been altered to reflect a modern vision for the coin program. The year of minting, nation of issue, and purity were engraved below the design set, with the weight engraved to the left, metal content to the right, and an “OM” mint mark added.

The obverse side still features the coat of arms for Mexico, but on the 1 oz coin it was surrounded by 10 historic versions of the official seal used by the government in the decades following the nation’s independence. Smaller coins in the series, such as the ½ oz, ¼ oz, 1/10 oz, and 1/20 oz, lack the surface space to accommodate the historic versions and, as such, only feature the modern coat of arms.

Mexican Libertad coins do have status as legal tender in the country, unlike the Centenario, but do not have a face value as the Centenario did. Banco de Mexico authorized the Libertad coin with a floating currency value, meaning that its use as a circulation coin would require retailers and financial institutions to check with Banco de Mexico on a daily basis to determine the current value of the coin.

In 2000, slight adjustments were made to the design on the obverse face of the Gold Mexican Libertad. Winged Victory was now depicted from the side in a fashion similar to the statue of the Angel of Independence that stands in the center of Mexico City. The background image of the volcanoes was given greater prominence that on previous coins, and details used to represent it were enhanced.

As a result of its introduction following the revisions in 2000, Proof Gold Mexican Libertad Coins are only available with the modern designs on both the obverse and reverse sides of the coin. The Mexican Mint has produced the Proof Gold Libertad every year since 2005, with the exception of 2012. Banco de Mexico issues tight restrictions on the total number of coins produced each year. The highest production year to date for Proof Gold Mexican Libertads came in 2011, which marked the first time that more than 1,000 coins were struck in each of the five weights. Production in 2014 marked an all-time low, with just 1,350 coins in total across all five weights.

Proof coins originated as practice coins, of sorts, for the mints producing circulation currency coins for countries. When the first dies were struck, proof coins (as they became known) were used to judge the accuracy of the strikes, pressure of the coining press, and clean lines of the design. Another original use for proof coins was in government archives as a record of national coins produced.

It wasn’t until the late 20th and early 21st century that proof coins became so popular. In fact, proof coins have become so popular among numismatists that many programs actually produce more proof versions of a coin than bullion versions. Proof coins are the result of a unique coining process that involves polishing the dies. The difference between a bullion coin and a proof product is the presence of sharper rims and designs, smoother fields, and frosted appearances.

When blanks are struck by polished dies with special chemicals, and under greater pressure than bullion coins, the result is a design set that has a frosted appearance and a background field with a mirrored finish.

Why Proof Gold Mexican Libertads from the Mexican Mint?

Although it is not as well-known as the Royal Canadian Mint or the United States Mint in the Western Hemisphere, the Mexican Mint is the oldest operating facility in the Western world. When Spain completed its conquest of the Aztec Empire in 1527, it sent a viceroy to what would become the capital city of New Spain: Mexico City.

In his hand, the viceroy had a decree from the Spanish crown to establish a mint in the New World. The Mexican Mint was completed in 1535, and produced sovereign Spanish coins for use throughout the colony of New Spain, which not only included Mexico, but most of Central America, Cuba, Haiti, the Dominican Republic, and even the Philippine Islands in the Pacific Ocean.

With the establishment of Banco de Mexico in 1925, a more uniform monetary policy was undertaken in Mexico. Today, Banco de Mexico tightly controls the production of gold and silver coins, as well as paper banknotes, from the Mexican Mint.

Silver.com shipping rates are tiered based upon the total amount of your purchase. Any purchase exceeding $3,000 in total is eligible for free standard shipping and insurance, with expedited shipping available at an extra cost. Silver.com will work with your carrier to recover any lost items during shipping, and we’ll start the paperwork on your behalf to file insurance claims if your products are not found or are damaged.

All shipments are handled by the United States Postal Service or UPS, and a tracking number will be provided to you in your authorized email account within 24 hours of your package shipping.

If you have any questions about Proof Gold Mexican Libertad coins, please don’t hesitate to reach out to a Silver.com associate. You can reach us on the phone at 888-989-7223, connect with us conveniently online through our live web chat, or send us an email.