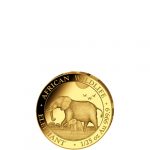 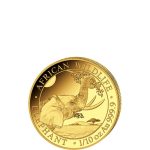 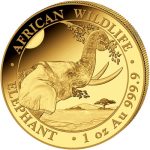 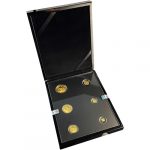 The growth in variety of sovereign coins offered by mints around the globe has created increasing interest in both bullion and proof versions of coins from many nations. Among the fastest growing coin programs in terms of mintage and demand is the Somalian Elephant coin. Struck in both bullion and proof versions, the Somalian Gold Elephant remains a rising star in the minds of investors and collectors alike.

History of the Somalian Elephant Coin

African Wildlife Series coins are struck featuring native species to the continent, and have been released in the name of various nations over the course of the past two decades. The Somalian Elephant coins are now struck on an annual basis by the Bavarian State Mint in Munich, Germany. Coins are produced in both gold and silver, with a minimum fineness in both metals of .999 purity. The face value is listed in Somali Shillings, and has changed over the years on the silver coins.

Somalian Gold Elephant coins are available, like their silver counterparts, in both bullion and proof versions. The 1 oz coin is standard in bullion, as is a 1 kilogram coin. The proof version is struck on an extremely limited scale, and is often restricted to just one of the available weights. Regardless of bullion or proof, Somalian Elephant coins feature a rotating image from one year to the next.

Each year, the Bavarian State Mint sticks to the African Elephant design motif, but creates a brand-new image for use on the reverse side of the coin. The obverse side of each coin features the same image from one year to the next.

Why the African Elephant?

The African Elephant is the world’s largest land mammal. On the African continent, the elephant has captured the imagination of human societies dating back to antiquity. The Carthaginians were the first to domesticate elephants, in a manner of speaking, for use as cavalry animals in war. The Carthaginians famously handed the Roman Empire numerous defeats on the field of battle courtesy of its war elephants. The latter armies of Alexander the Great conquered much of the known world, including much of Somalia and Northern Africa, with the elephant at the heart of its cavalry.

In the modern era, elephants were pushed to the brink of extinction because of the value of their hides in human society and the monetary value of the ivory in their tusks. Even though elephants now enjoy protected status, they are still hunted by poachers looking to cash in on the value of ivory.

Although most Westerners believe elephants to be one species, there are actually two sub-species of elephant. The African Bush Elephant is the species commonly known to Westerners, and holds the distinction of being the largest land mammal in the world. However, its cousin the African Jungle Elephant is only slightly smaller in size and weight, tipping the scales as the third largest land mammal in the world.

Somalian Gold Elephants are not struck in the same mintage levels as the silver version of the coin, making it harder to find these coins today. Although the mintage levels are different, the design features used on both are the same. The motif used each year remains the same. The African Elephant is always featured, sometimes just one and other times in packs, along with common sights from the African savannas.

Some of the common design features used along with the elephant are those of water (lakes or rivers), trees and grassland, and either the rising/setting sun or moon. One of the more unique coin designs came in 2006 when the continent’s highest peak, Mt. Kilimanjaro was featured in the background behind the elephant. Otherwise, the background scenes are always generic depictions of the creature’s natural habitat.

Engravings on this side of the coin always include three different sets. “African Wildlife” is always engraved above the primary design set. “Elephant” is engraved in the bottom left below the design, while the coin’s weight, metal content, and purity are featured in the bottom right below the image.

On the obverse side of all coins is the coat of arms for the Republic of Somalia. In this design, a pair of leopards are positioned on either side of a heraldic shield. The shield itself has three spikes on its top, a field of horizontal bars on the face, and a single star in the middle. Below the shield are two spears that cross one another, with a ribbon intertwined in between them.

On the latest Somalian Gold Elephant coin, the reverse design features an adult female elephant leading her young calf across the savannas. In the background, some of the region’s signature trees rise toward the horizon as a flock of birds flies overhead.

The Bavarian State Mint strictly limited the mintage of Somalian Elephant coins early on, with mintage capped at 5,000 coins annually from 2004 to 2008. Following the explosive growth in the popularity of gold and silver products, the Bavarian State Mint adopted a more reactive mintage level, striking coins in greater numbers in an effort to match demand for the Somalian Elephant.

When it comes to different weights, the Somalian Gold Elephants are only available in 1 oz in bullion. Proof coins are struck in fractional weights however. For example, a 2015 4-coin Proof Set features a 1 oz, ½ oz, ¼ oz, and 1/10 oz. There are also a select few Somalian Gold Elephants available that have been certified by either the Numismatic Guaranty Corporation or the Professional Coin Grading Service.

Both the NGC and PCGS are internationally recognized as the finest certification services in the industry. When these companies grade a coin, it adds instant value to the product because of the prestige and excellence of both companies in grading and certifying coins. Somalian Gold Elephants are available with the following grades:

The Bavarian State Mint is a state-owned entity of the local government in the Free State of Bavaria. Founded in 1158, the Bavarian State Mint is one of the oldest operating facilities in mainland Europe. It is one of the five official German mints, producing circulation and commemorative currency for both Germany, and smaller nations around the globe.

The legal tender status of Somalian Gold Elephants remains a question mark given the nation’s current political climate. While a letter of authorization to mint the coins on behalf of Somalia is on record with the mint, the nation’s Central Bank chief has said the coins are not authorized. This fact aside, the quality of striking and gold content of these coins means they have immense value as both an investment tool and a collector’s item.

We gladly accept a variety of payment methods for processing your purchase of Somalian Gold Elephants. Visa and MasterCard credit/debit cards are accepted and take an average of one business day to process. Bank wire and PayPal fund transfers are accepted with immediate processing. Paper checks are also accepted, and take as many as six days to process.

Once your payment has processed, your order moves to our shipping queue. All products are packaged in discreet boxes with no clear identifying labels in an effort to protect the identity of the products within. Your shipment will be delivered via the United States Post Office or UPS, with an affordable shipping scale determined by the total cost of purchase. All orders in excess of $3,000 qualify for free standard shipping and insurance.

If you have any questions about Somalian Gold Elephants, payment methods, or shipping, please feel free to reach out to a Silver.com associate. We’re available on the phone at 888-989-7223, online through our live web chat, and via email.