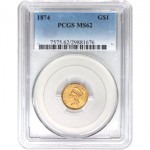 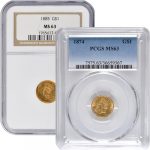 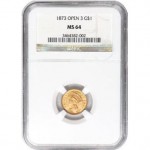 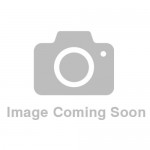 One-dollar Indian Gold Coins emerged in the mid-1800s as a result of a massive gold influx to the U.S. Treasury. These beautiful coins have a rich history that probably has very little to do with the Native American “Indian.” Interestingly, numismatic scholar Walter Breen suggests that what appears to be an “Indian” head on some of the coins actually is a replica of a Roman marble figure.

America’s first $1 gold coins were not struck at the U.S. Mint. Rather, they came from the private mint of North Carolina jeweler Christopher Bechtler circa 1830. Bechtler’s coins, in fact, are the smallest legal tender that the U.S. has ever known. The coins amounted to more than $2.2 million by the end of their tenure and were, in fact, part of what inspired the federal government to create its own minted gold coin.

A Glimmer in the Water: The Early Days of Federally Minted Gold

In 1848, a sawmill operator spied some golden flecks at the bottom of a channel bed in Coloma, California. These flecks were the gold bits that sparked the California Gold Rush of the 1800s. By 1849, gold-seekers known as “forty-niners” had amassed so much metal that the government made an executive decision to mint this new surplus into two new coins: the double eagle twenty-dollar piece and a one-dollar gold coin. This decision was known as the Gold Coinage Act of 1849.

U.S. Mint Director Robert Patterson balked at the idea of the new coins, but his objections were cast aside. James Barton Longacre, a Pennsylvania native, was appointed the designer and engraver of the new tender. Longacre has earned praise from historians for the precision with which he exacted his designs. Indeed, most of the die work for the coins was completed by Longacre’s own free hand.

The dollar gold coin endured several design changes during its 40 years of minting. All told, the U.S. put out three versions of the $1 gold coin: Type 1, Type 2, and Type 3. Of these, the Type 2 and Type 3 dollar gold coins bore the likeness of a Native American and are referred to as “Indian” gold dollars. The $1 Type 1 Liberty Gold Coin featured the image of Lady Liberty.

Type 2 coins were minted between 1854 and 1856 and were 15 percent larger than the Type 1 “Liberty Head” coins. Instead of Lady Liberty, one side of this coin featured the profile of a female in a headdress. The female earned the nickname “Indian Princess,” and the coin quickly became known as an “Indian Head.” On the back, an agricultural wreath of corn, cotton, tobacco, and wheat encircled the denomination and date.

Most Type 2 coins sustained a manufacturing flaw in which some details became muddled. The princess’s hair, the date, and the word “dollar” were not as sharp as they could have been due to the flaw, and minting lasted only two years because of this. Fewer than two million Type 2 coins were produced, most of them in Philadelphia’s mint. Because of the flaw, a new edition emerged in 1856: the Type 3 coin.

Type 3 coin minting lasted the longest of this series, from 1856 to 1889. Longacre enlarged the princess’s portrait and cut the thickness of the coin. The “United States of America” inscription still circled the princess’s head, but it hovered closer to the perimeter of the coin. Like the two other renditions, the Type 3 also pictured an agricultural wreath on the reverse side.

Production of the gold dollar ended in 1889, just as the so-called “Gay 90s” ushered in. It wasn’t until President Franklin Roosevelt abandoned the Gold Standard in June 1933, however, that all gold coins became completely obsolete.

People seeking Indian gold dollar coins are likely to have an easier time finding graded Type 3 coins than any other variety. These coins are less likely to show signs of wear than their Type 1 or 2 counterparts. Because Type 2 coins were minted for just two years, a collector or investor could hope to obtain six different designs at most. Given the rarity of these coins, particularly the 1855-D and C, it would be more likely for an investor to find and buy Type 2 coins individually.

Indian Gold coins are valuable collectors’ items that are also used as investment vehicles. Rich in beauty and American history, those looking to expand their precious metals portfolio can’t go wrong with the Indian Gold dollar coin. These coins can be purchased through Silver.com in certified condition, as well as uncertified and raw condition from many different varieties.