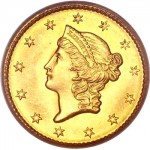 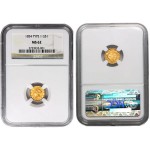 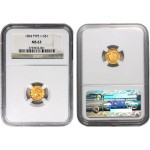 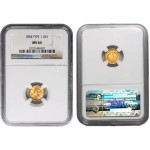 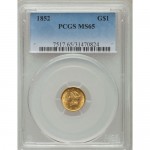 History of the Liberty Gold Dollar

The U.S. government wasn’t the first to mint a $1 gold coin, however. During America’s first gold rush in North Carolina in the 1830s, a jeweler by the name of Alt Christoph Bechtler began offering to turn prospectors’ raw gold into coins.

At the time, much of the commerce in the South was done through bartering. The banking system was in chaos as the state banks often issued paper currency and then recalled it soon after. This paper currency was often inadequately backed by any real assets and was therefore unstable. English and Spanish coins were circulated in small numbers; there was no consistent pricing, though, and their worth varied from place to place.

The only U.S. mint at the time was in Philadelphia, and because there were few roads from North Carolina to Philadelphia at the time, it was a long, dangerous, and uncomfortable journey. It was easier, in fact, to ship the gold to Europe to be minted than to send it north to the mint in Philadelphia.

Bechtler took this need and turned it into a booming, successful mint. He also transformed the economy in North Carolina by providing a stable and consistent coinage that could be circulated throughout the state. By 1840, he had produced more than $2.2 million in gold coins.

At the time, the U.S. government wasn’t involved in minting gold dollars, but when they noticed Bechtler’s huge success, many in Congress pushed for the federal government to mint its own gold coins. So in 1836, Congress authorized the U.S. Mint to start minting gold dollar coins. The mint director at the time, Robert Patterson, opposed the idea and therefore put the project on hold for several years.

In 1849, a new gold rush hit California and again piqued Congress’ interest in a U.S. gold coin. Over Patterson’s continued objections, Congress proceeded to pass into legislation the Coinage Act of March 3, 1849, and authorized the production of both gold dollar coins and the $20 gold double eagle. Congress opened three new federal mints, including one in Charlotte, North Carolina.

The designer of the first U.S. gold dollar coin was James B. Longacre. Longacre, one of the few officers at the Philadelphia Mint, was not a friend of Director Patterson, who still opposed the gold dollar. This first gold dollar was known as the “Liberty Head” or the “Type I” gold dollar.

The obverse depicts Lady Liberty in profile wearing a coronet with the word “Liberty” inscribed across the crown. Her head is encircled by 13 stars. Her hair is done up in a classical design with ringlets that reference ancient Rome.

The reverse side of the coin has a wreath that encircles the date and the value of the coin and the words “United States of America” circling the outside. In 1854, the obverse design was replaced with an Indian Princess design, also known as the “Type II” gold dollar. This design only lasted two years and was later replaced by the $1 Indian Gold Coin (Type III) in 1856.

Production of the gold dollar declined during the years of the Civil War, as people’s faith in the Union was shaken, and many began to hoard metal coinage. All three federal mints in the South eventually closed their doors.

By the end of the war, only the western regions of the United States were still using gold and silver coins for trade. The rest of the nation was primarily using the new Greenbacks produced by the federal government to fill the gap in commerce and to finance the war.

Due to its severe decline in circulation, its small, inconvenient size, and its tendency toward abrasion, the gold dollar was officially discontinued on September 26, 1890. Several decades later, in 1933, the production of all U.S. gold coins was ceased by President Franklin D Roosevelt.

As coin investing became a popular hobby in the 20th century, U.S. $1 gold coins were in especially high demand and remain so today. The gold coins have consistently been a popular collector’s item and are also used as an investment vehicle. They are available in certified Mint State grades and uncertified grades. These coins are most commonly certified by the Numismatic Guaranty Corporation (NGC) or Professional Coin Grading Service (PCGS).