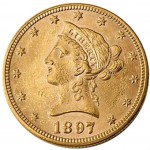 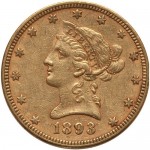 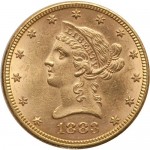 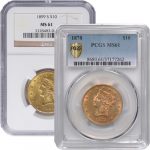 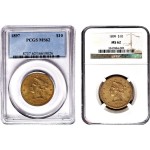 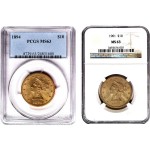 The $10 Liberty Head Gold Eagle was first released in 1838, picturing a stunning design composed of .48375 troy ounces of pure gold. For 70 years, the U.S. Mint produced these gorgeous coins that today remain some of the rarest, most historic pieces in any collection. During those seven decades of circulation, the design of the $10 Liberty Head Gold Eagle changed only once and only because America itself was changed forever. These coins represent a harrowing piece of U.S. history, making them coveted by investors and collectors the world over.

Although the Eagle was first issued in 1792, the coin would see no semblance of circulation until 40 years later. The fluctuating price of precious metals made it impossible for the original $10 coin, known as the Capped Bust eagle, to find its way into the world of commerce.

For 30 years, only half eagles were made in large quantities, mostly to facilitate transactions between banks, and quarter eagles saw little production. Finally, in 1834, Congress decided to change the gold/silver ratio to 16 to 1, causing silver to be worth less than the international market price of the time. With some more fine tuning, the $10 gold eagle was again ready for circulation.

Engraver Christian Gobrecht was tasked with preparing dies for the coin, standing in for Mint Chief Engraver William Kneass, who had recently suffered a severe stroke. Gobrecht originally hailed from Pennsylvania until he took up a job engraving ornamental clocks in Baltimore. He moved to Philadelphia in 1816, where he worked for an engraving firm. It was there that Mint Director Robert Patterson approached Gobrecht to offer him the position of Assistant Director, but Gobrecht declined. He eventually joined the Mint in 1823 and took up the position of Chief Engraver in 1840.

Gobrecht was inspired by a painting titled “Omnia Vincit Amor” by Benjamin West. This portrait includes Venus’s profile, donning a coronet. Gobrecht modeled Lady Liberty in much the same way. The $10 Liberty Head Gold Eagle depicts the Lady’s bust, facing left, wearing a coronet inscribed with the word “Liberty” on the obverse. She is circled by thirteen stars to represent the thirteen original colonies. On the reverse, an eagle perches atop a bundle of arrows while gripping an olive branch in its beak, symbolizing America’s penchant for peace, as well as its readiness to defend its shores at all costs.

Until 1866, the Eagle coins did not depict a motto on either face. It wasn’t until the beginning of the Civil War that changes were proposed to the coin. As the country was ravaged by violence, Americans began looking to the divine for hope and peace. A reverend from Pennsylvania proposed that the nation’s faith be recognized on its coinage. “In God We Trust” appeared on the reverse of the Liberty Head Eagle for the remainder of its circulation.

The $10 Liberty Head Gold Eagle series ended in 1907 after President Theodore Roosevelt expressed his concern that U.S. coinage lacked any artistic merit. He enlisted the help of artist Augustus Saint-Gaudens to design new coins. His famed Indian Head Gold Eagle replaced the Liberty Head, ending its 70-year run. Because the design had not been changed in decades, no act of Congress was required in order to issue a new design.

Today, this coin is still widely sought after by collectors and investors alike despite having been out of circulation for nearly 100 years. Its high gold content makes it especially attractive to investors, and collectors are drawn to the Liberty Head Gold Eagle’s age and rarity. Silver.com offers an exquisite collection of these marvels, both in graded and uncertified condition.

Due to the coin’s rarity in relation to its demand, supplies of the Liberty Head Gold Eagle dwindle quickly. Whether you’re a collector, investor, or just someone who loves the idea of owning such a dazzling piece of our nation’s history, waste no time in picking this coin up. These coins can be an invaluable piece to anyone’s collection.