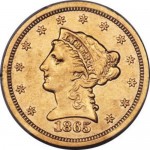 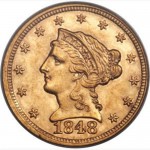 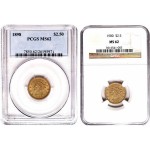 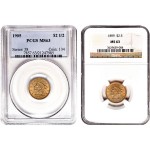 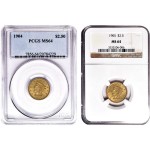 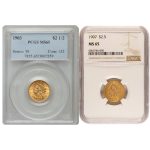 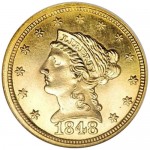 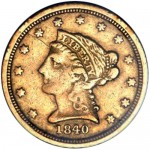 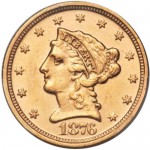 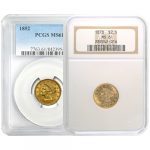 Numismatists and precious metals collectors who want a diverse portfolio and who appreciate details love $2.50 Liberty Gold Quarter Eagles. These beautiful and unique coins feature intricate, patriotic imagery; a high gold content; and rich historical significance. They have not been minted for more than a century, making them rare and highly sought after by knowledgeable collectors.

Even an untrained eye that looks at a Liberty Gold Quarter Eagle coin will notice the carefully wrought details of the design. Such a masterpiece did not come about by happenstance. The Classic Head Quarter Eagle gold coin, which had the same face value as the Liberty Gold Quarter Eagle, was the coin’s predecessor, but the Classic Head design lacked intricate details. That classic design, crafted by engraver William Kneass, failed to capture the affections of the U.S. Mint and the public and lasted only from 1834 to 1839.

The design torch passed to Christian Gobrecht, the Acting U.S. Mint Engraver. His design, with its thoughtful details and meaningful symbols, won the Mint’s approval. Production of the Liberty Gold Quarter Eagle coins began in 1840 and continued for almost 70 years.

The Liberty Gold Quarter Eagle is only one of Gobrecht’s many accomplishments. The Gobrecht Silver Dollar, with its renowned seated Liberty design, is also well-known and highly collectible. Gobrecht even had a hand in designing the U.S.’s only 20 cent piece.

The Mint wanted a design that could become an icon, something easily recognizable that the U.S. could proudly boast of as its own. With the Liberty Gold Quarter Eagle, they received just that.

The coin’s obverse features a left-facing Lady Liberty, her gaze directed upward and her countenance dignified. Her coronet is particularly noteworthy; the word “Liberty” is written across it in bold, easy-to-read letting. The elegant curls of her hair testify to Gobrecht’s fastidiousness. Also noteworthy is the ring of stars that adorn the coin’s circumference. The thirteen stars pay homage to the original colonies. Struck underneath Lady Liberty’s bust is the year of the coin.

Another symbol of freedom — an eagle — is the focal point for the coin’s reverse, though it has a slightly different connotation. The mighty eagle has its wings spread wide, and its gaze is directed upward as it takes to flight. In one talon, it clutches an olive branch, a universal symbol of peace that speaks to the U.S.’s desire for pacifism. The other talon, however, holds arrows. Those arrows, along with the shield that protects the eagle’s chest, symbolize the country’s readiness for war. The words “United States of America” and the coin’s face value march around the reverse’s circumference.

Some of the earliest strikes of the Liberty Gold Quarter Eagle do not have the same crisp details as later strikes, but they still appeal to the eye. Furthermore, their antiquity gives them special value for numismatists.

Because the Liberty Gold Quarter Eagle coins had such a long run, one might think that they are easy to find. Not so. When they go on sale, they sell fast, particularly if they have specific attributes. For example, 1848 CAL Liberty Gold Quarter Eagles are a hot commodity. They were made with ore from California and have the state’s abbreviation stamped on them; many collectors consider them to be the U.S.’s first commemorative coins.

1841 and 1875 versions of the coin struck in Philadelphia are also extremely rare; only a handful still exist today. 1854 Liberty Gold Quarter Eagles from the San Francisco mint hold special value as well; less than 250 were struck that year because of a shortage of parting acids.

Liberty Gold Quarter Eagles are 90 percent gold, making them precious for more than their captivating design. Savvy investors recognize their value and snatch up these coins for both their gold content and their historical value.

History buffs, too, are eager to get their hands on these gorgeous specimens; they make attractive display pieces. MS-graded coins still have their original grandeur and are particularly worth showing off. Cleaned coins are often available and are shipped in protective packaging, but they may lack the luster of their mint-state counterparts. These coins are available in many forms on Silver.com and we invite you to browse our inventory today.