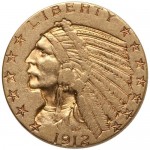 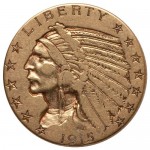 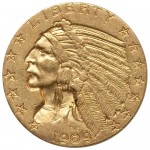 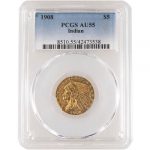 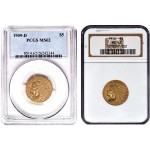 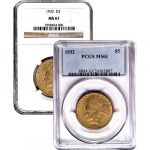 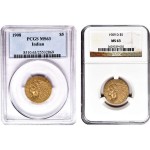 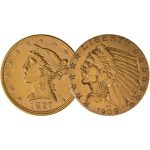 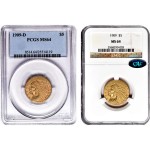 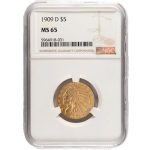 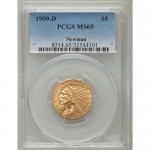 The last design of the Half Eagle, the $5 Indian Head Gold Half Eagle coin is highly sought-after by collectors and investors for its unique attributes. In addition to its appealing 0.900 gold purity, the Indian Half Eagle is one of only two coins — the $2.50 Indian Quarter Eagle is the other — in U.S. currency with an incuse, or recessed, design.

The Indian Head gold coin series is fairly small, with just 24 mintmark and date combinations struck during its eight-year mintage. Below is a summary of this prized coin’s history, design, and availability.

History of the Indian Gold Half Eagle

In the early 20th century, Americans became increasingly weary of the designs of circulation coins. Many such coins had been introduced almost a century before, and others that were recently altered still fell short of being considered works of art. President Theodore Roosevelt believed that a nation’s coins should reflect its artistic skill, and thus sought to redesign America’s coinage.

Roosevelt and Bigelow chose Pratt to preserve the high standards set by sculptor Augustus Saint-Gaudens, the designer of the $20 Double Eagle Gold Coin and $10 Indian Head Gold Eagle Coin. Saint-Gaudens died in August 1907, creating the vacancy that Pratt filled. The design of the $5 Indian Gold Half Eagle was finalized in the summer of 1908, and production began at the Philadelphia Mint a few months later.

The obverse of the coin features an Indian chief in profile wearing a ceremonial, feathered headdress. Around his portrait are 13 stars that symbolize the 13 original colonies. The word “Liberty” is inscribed above him, and the mintage year appears below.

The reverse depicts a bald eagle perched on a bundle of arrows that resemble the Roman fasces, a symbol of the power to kill, entwined with an olive branch, a symbol of peace. “E Pluribus Unum” is printed in the left field and “In God We Trust” in the right field. “United States of America” appears above the bird, and the denomination of “Five Dollars” below. The inscriptions and design are stamped in incuse rather than raised from the surface, so the flat surfaces are the coin’s highest points.

The Indian Gold Half Eagle was minted from 1908 to 1916, when the onset of World War I forced the suspension of production. Although the Mint attempted to resume production of the coin in 1929, its mintage lasted only one additional year, making the Indian Head the last $5 gold coin ever minted in the U.S.

Due to the global economic downturn in 1929, most gold coins were removed from circulation. During the 1930 recall of all gold coins, many of the Indian Half Eagle’s final issue were melted. While the production of circulating Half Eagles ceased in 1929, West Point began minting commemorative Half Eagle and $5-denominated bullion coins beginning in the late 20th century.

Today, almost a century after its production halted, the $5 Indian Gold Half Eagle coin increasingly is hard to find, and even more difficult to find in better conditions. Because of its lack of raised rims, most of the Indian Half Eagles that survived in mint state have the lower grades of MS-60 to MS-63. Collectors preserved the most coins in the first year of issue, so 1908 Indian Half Eagles in great condition are easier to find than those of other years. Typically, these coins come certified by either Numismatic Guaranty Corporation (NGC) or Professional Coin Grading Service (PCGS).

As a significant historical and artistic piece, the Indian Half Eagle is highly collectible, growing rarer each day. The coin also has tremendous value to those who wish to invest in gold. Whether you value the coin for its investment or collector’s value, you can find beautiful, certified $5 Indian Gold Half Eagles from all mintage years on Silver.com.