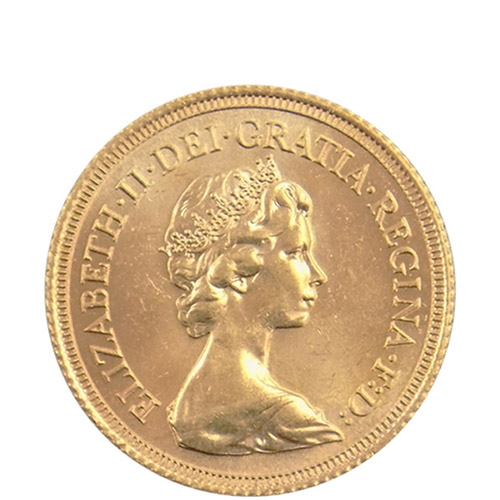 The Royal Mint reinstituted the gold sovereign coinage in 1817 during the reign of King George III. The Great Recoinage of 1816 revamped British coinage and brought back the gold sovereigns originally issued in 1489 during the rule of King Henry VII. Right now, Great Britain Gold Half Sovereign Coins are available to purchase online at Silver.com.

On the obverse of these Great Britain Gold Half Sovereign Coins of Elizabeth II, there are four possible designs. The coins from 1980 to 1984 feature Arnold Machin’s second-generation portrait of Elizabeth II as a young woman with no crown, only a wreath around her head. The 1985 to 1997 coins feature Raphael Maklouf’s third-generation portrait with the Queen wearing the royal diadem.

The obverse of Gold Half Sovereign coins features the fourth-generation depiction of Queen Elizabeth II from 1998 to 2015. This was designed by Ian Rank-Broadley. All Great Britain Gold Half Sovereign Coins from 2016 onward include Queen Elizabeth II in a fifth-generation right-profile portrait. This was created in July 2015 by Jody Clark of the Royal Mint.

On the reverse of Great Britain Gold Half Sovereign Coins from Elizabeth II’s reign include the St. George design. Originally created in 1817 by Benedetto Pistrucci, this design features St. George riding on horseback as he rides down the dragon.

If you have any questions, please contact Silver.com. Our customer service associates are available at 888-989-7223, online using our live chat, and via our email address.